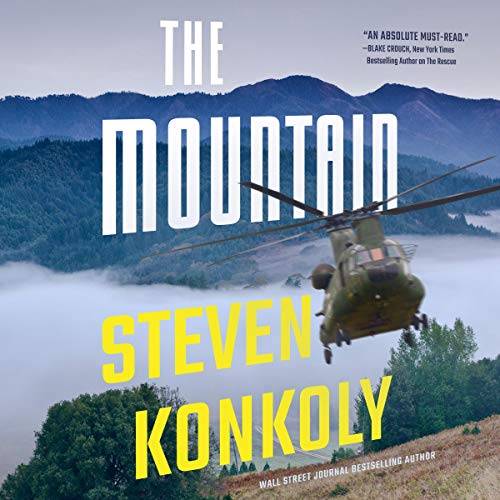 Fast-Paced Action, I Loved It

I knew going into this that it was going to be a fast-paced thriller from the beginning. I was right. Konkoly brought the action again, this time having the team take down an illegal pot farm in the seemingly lawless hills of Murder Mountain. They thought it was just going to be a search for a missing person but it turned into so much more.

This is the third book in the Ryan Decker series and I really enjoyed all three of them so far. Konkoly even had one of the characters makes jokes about the situations that the they get into are like other books in the same genre. That gave me a good laugh.

This being a book three there are some moments in it that have been building throughout the series – but I think you might be able to pick this up and start it here. You might just miss some of the inside jokes and some of the “how do they know that person” type of moments. But, if you’re thinking about doing that, just pick up The Rescue first. You won’t regret it.

The actual subject matter of this was interesting since I’d just watched a Netflix documentary on this specific region. It went into detail about how hard and expensive it is to get into the legal pot trade, especially for a smaller farmer. And how some of them were choosing to still farm for the black market. I had no idea that was happening and found it interesting that this book talked about similar items. Konkoly obviously turns the heat up a bit more in The Mountain.

The narration by Rivera was good as well, he’s been the voice of Decker throughout the series and has done a great job with it. He is Decker at this point and I hope that if there are more books that they can continue with his narration.

Overall, the story itself was awesome and I absolutely flew through it (I tried to have it done on release day but I only missed it by a few days). One thing you can count on with Konkoly, and that’s a relentless, tightly written action thriller. The Mountain was definitely that, and I can’t wait to see where the next book takes us.

Investigating a missing persons case on Murder Mountain means looking for trouble in a propulsive thriller by the author of The Raid.

When someone disappears on Northern California’s lawless Murder Mountain, it isn’t news. The vast terrain for illegal marijuana harvests is also a notorious black hole for outsiders. But when that someone is the family friend of the persuasive and righteous Senator Steele, finding him becomes covert investigator Ryan Decker’s mission.

For Decker, the risks of infiltrating a multibillion-dollar outlaw industry are greater than he could possibly understand. Especially when that industry has flourished into the profitable backbone of a secretive and influential DC-based think tank. And protecting its untraceable revenue in the Emerald Triangle is a band of ruthless white nationalists.

What begins as a seemingly straightforward favor soon pulls Decker and his partner, Harlow Mackenzie, into a high-stakes conspiracy linked to the most cold-blooded puppet masters and power brokers in the country. The harder Decker and Harlow work to expose the insidious faction, the harder it’ll be to make it out of Murder Mountain alive.