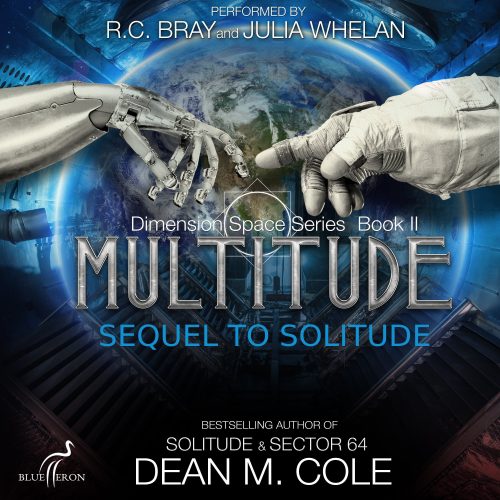 Cole Does It Again

Multitude was a book I didn’t even realize that I needed. It was the perfect book that hit me just at the right time. I went into it completely blind (no synopsis reading) and only had a memory of really enjoying the first book.  I could barely remember what happened – other than I remember them potentially being 2 of the last people on Earth.

As I said in the review of Solitude – Cole can right.  And I think he got even better with Multitude.  There were scenes where if another author had written it – I think I would have been lost.  But Cole was able to write it in a way that both made me feel confused but also understand at the same time. The purposeful confusion is really hard to pull off but can work extremely well in a book like this where even the main characters are confused.

I loved that even through all of the peril and issues that they were going through – they were still able to make me laugh.  There was a scene where Angela is too loud and scares Vaughn and his reaction had me in stitches. And numerous other times the way that he reacted to her was just the right amount of comedic reprieve.

(Hopefully, Dean is okay with me adding in one of the quotes that had me cracking up)

Vaughn leaned in close to inspect the oddly shaped columns and then nearly shit himself as Angela’s voice cracked the silence. “Where are you going?!”
“Geez, woman!” he whispered harshly. “Why don’t you just ring the goddamned dinner bell?” “Oh shit … sorry.” “Now she whispers,” Vaughn grumbled as he shook his head.

This was one of those books that has you on the edge of your seat for seemingly the entire book.  Cole wrote Vaughn and Angela into crazy situations and after a while, I wasn’t sure what was going to happen to them.  Right as they started to feel like giving up I remember thinking to myself I couldn’t do it anymore and even I as a reader needed a break. Of course, they pushed on and Cole didn’t give me much time to take a breath, but it was for the better because it made me stay up to finish that next chapter.

I remember writing that it wasn’t even the halfway point when reading Solitude and I thought I’d found my book of the year – I feel that way 4 months into 2019.  I’m sure there will be other books that’ll come out later this year to challenge this but the combination of Cole’s absolute blitzkrieg writing and Whelan and Bray’s dual narration – it’s going to be a hard one to beat.

I didn’t think the narration of this series could get any better (Whelan and Bray combo) but Cole listened and they know narrator their lines instead of just bouncing between chapters. It absolutely makes this book fly by since you’re completely entrenched in what is going on with the characters.

Overall, just a fantastic book that I can’t even get into why I liked since it would spoil not only the first book but definitely this book.  I absolutely flew through it and will probably pick book one back up again since I enjoyed it so much.

When an alien attack rips a hole in spacetime, can humanity’s last two navigate looping dimensions to reverse the event and return life to the planet? Following the incredible events of Solitude, Vaughn and Angela must probe the depths of space and time to unravel and perhaps even reverse the enigma of humanity's disappearance. But first, they must get past themselves. If you enjoyed Solitude, you'll love the action and plot twists in this apocalyptic epic.

Vaughn had visions of plying the seven seas with Angela at his side. Then she and fate crapped all over his plans. Bent on discovering the truth about what happened to humanity and the rest of the world's life, Angela drags a less than willing Vaughn across the Mediterranean and into central Europe. However, even the overhead presence of a line of levitating steel structures and ships couldn't prepare them for what lied ahead. The size and scale of what they find in Geneva rocks them to their cores.

Angela and Vaughn fall into the center of a world-consuming machine. While struggling to survive, they wander through a looping chain of utterly alien lands. When they finally deduce the true nature of their situation, Angela discovers a potential way out, not just for her and Vaughn but all of Earth's life.

Angela can bring back the whole of the human race!

But only if she and Vaughn can survive the journey home.

Find Out What Happens. Scroll Up, And Order Your Copy Today!

What Your Favorite Authors are Saying About Dimension Space

"Like ‘The Martian’ on (and above) Earth. An epic survival story with very human characters, clever problem-solving and a gripping mystery. The end left me with NO IDEA where Dean was going with the story, I couldn’t wait for the next book.”

"R.C. Bray and Julia Whelan are individually stellar. Having them co-voice Dean M. Cole's superb Dimension Space Series is a stroke of genius. Rich with elements of every genre, Solitude is an outstanding listen.”

Also by this author: Solitude, Sector 64: First Contact
Also in this series: Solitude