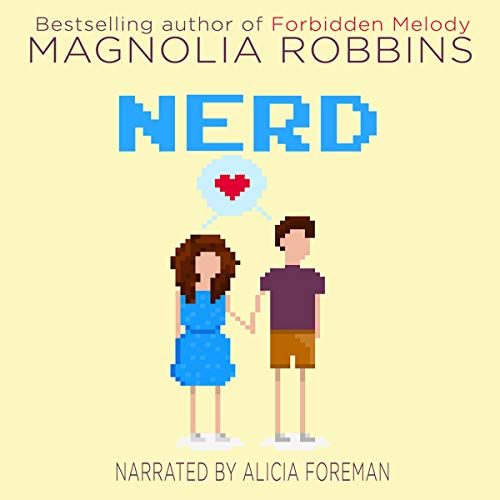 Welcome to my very first romance/romantic comedy book review. I’ve been wanting to dive into this world but I had no idea where to start.  When I saw this book I figured it was going to be the one for me.  So, forgive me as I’m just getting into this world and as an atypical romance audiobook lover I’ll probably like things that others wouldn’t and I’ll probably not be bothered by other things.

First and foremost – I knew going into this that if Robbins screwer up the nerdy parts of it that it was going to ruin the book.  Thankfully she didn’t at all.  There were lots of references to old science fiction that were spot on. DnD games that were played properly and mentions of cosplay and other events at San Diego Comic Con. Robbins is either a nerd, knows a nerd, or seriously did her research for this book.  Kudos for that.

Now, onto the love story.  I’ve been a long-time fan of romantic comedies.  10 Things I Hate About You, 13 Going On 30, and Hitch being three of my favorite movies.  If I was going to compare this to a movie – I would definitely say 13 Going on 30’s plot line (falling for your best friend) with Big Bang Theory nerdiness thrown in.

This is a FF story that I thought was well written.  There were two main sex scenes that felt passionate and real.  The love and move into and towards love was also well played out (going back and forth and wavering from time to time).  Lucy was definitely hurt a few times and Reese wasn’t the best person in the world for her – but I also get why Robbins threw in the ups and downs that she did.

I liked this a lot more than I thought I was going to and I look forward to getting into more books in this genre.  I particularly liked that it wasn’t super smut-heavy and it was much more about their dance around each other than about the actual acts (though, of course, there’s absolutely nothing wrong with sex).

Alicia Foreman did a pretty good job with the narration. I liked her pacing, tones, and overall vibe while reading.  My only issue was that if Robbins hadn’t told me which point of view we were listening to – I probably wouldn’t have gotten it.  The two MC’s were too similarly voiced for me to be able to pick it up quickly and know who was who.  But, it didn’t take away from the story since I knew via the book who was actually talking.

Overall, for a new-to-romance guy – this was a win from me.  I found myself wanting to listen to more even after it was over.

World renowned sci-fi television star Reese Simmons looks like she has it all - fame, wealth, and a slew of beautiful women who follow her every move. Except Reese’s life is crumbling around her. She hates her job and is constantly accused of being a “reckless party animal.” Reese’s agent decides the one surefire way to get her image back on track. She has to date the worst person in the entire universe, her co-star Justine Turner.

Her solution: she needs a fake girlfriend. And fast.

Enter Lucy, the BFF. Game store manager, board game geek, the world’s most amazing cosplayer, and Reese’s best friend practically since birth. When Lucy finds out Reese’s predicament, there seems like only one solution: pose as fake girlfriends. And Lucy is more than willing to play the part. She’d do anything for Reese - even if it means entirely too romantic tales about their relationship, hearing she’s “incredibly beautiful”, and expert kisses in public.

The problem: Reese and Lucy have been in love with each other all their lives - and they’re both completely clueless.

This book features two best friends, roleplaying games, and countless "fake" kisses and begs the question: Who wants a real girlfriend when faking is so much fun?