Estes Park police chief Marcus Colton and tracker Sam “Raven” Spears have never liked one another, but when a young girl goes missing in Rocky Mountain National Park, Colton hires Spears to help find her. Their search ends after a night of devastating horror. When word reaches Estes that the nation has been hit by a coordinated electromagnetic pulse attack, Colton and Spears are forced to work together again. But they quickly realize they aren’t just tracking a killer – they are tracking a madman. As the United States descends into chaos, the hunters become the hunted.

Halfway across the country, Senator Charlize Montgomery awakes to find the nation’s capital has gone dark. Forced to set off on foot, she treks across a city that has woken to a new world, and as the night progresses she learns the EMP attack was just the beginning.

The fight for the future of humanity begins…Jessica Rollins has made it to safety inside the Sanctuary system with the help of Ufuk Erdogmus, but is her mysterious savior really who he says he is? What secrets does he hide? And how is he connected to Dr. Muller?

Jess doesn’t have much time to ponder these questions, as soon she is fighting again for her life….

The Winter Over by Matthew Iden
Narrated by Karen Peakes

Each winter the crew at the Shackleton South Pole Research Facility faces nine months of isolation, round-the-clock darkness, and one of the most extreme climates on the planet. For thirty-something mechanical engineer Cass Jennings, Antarctica offers an opportunity to finally escape the guilt of her troubled past and to rebuild her life.

But the death of a colleague triggers a series of mysterious incidents that push Cass and the rest of the forty-four-person crew to the limits of their sanity and endurance. Confined and cut off from the outside world, will they work together or turn against one another? As the tension escalates, Cass must find the strength to survive not only a punishing landscape but also an unrelenting menace determined to destroy the station – and everyone in it. In book two of Craig Martelle’s End Times Alaska series, the Nagy family will be tested like never before.
After enduring the holocaust that destroyed Fairbanks, Chuck and his family did more than simply endure. They thrived. Together with other survivors, the Nagys are rebuilding their lives in the Alaskan wilderness, creating a better society. But the Russian military is closing in like a pack of wolves, and suddenly, in spite of all their progress, Chuck must make one of the hardest decisions of his life.
Ultimately, Chuck leads the survivors through 300 miles of Alaskan wilderness in a fight for freedom. The odds are stacked against them. Food is scarce and the weather is brutal, but Chuck unites the remaining survivors before they all – even his own children – are forced to pay the ultimate price.
Fans of military fiction will love the power, suspense, and deep family commitment of the End Times: Alaska series. The stories included in this volume span the five decades of Bova’s incandescent career at the center of science fiction and space advocacy.

Here are tales of star-faring adventure, peril, and drama. Here are journeys into the mind-bending landscapes of virtual worlds and alternate realities. Here you’ll also find stories of humanity’s astounding future on Earth, on Mars, and in the Solar System beyond – stories that always get the science right. And Bova’s gathering of deeply realized, totally human characters are the heroic, brave, tricky, sometimes dastardly engineers, astronauts, corporate magnates, politicians, and scientists who will make these futures possible – and those who often find that the problems of tomorrow are always linked to human values, and human failings, that are as timeless as the stars.

Fifty years ago, Mira, humanity’s last hope to find new resources, exited the solar system bound for Proxima Centauri B. Seven years into her mission, all transmissions ceased without warning. Mira and her crew were presumed lost. Humanity, unified during her construction, splintered into insurgency and rebellion.

Now, an outpost orbiting Pluto has detected a distress call from an unpowered object entering Sol space: Mira has returned. When all attempts at communications fail, a search and rescue vessel is dispatched from Trident Station to intercept, investigate, and tow the beleaguered Mira to Neptune.

As the marines prepare for the journey, uncertainty and conspiracy fomented by Trident Station’s governing AIs, begin to take their toll. Upon reaching Mira, they discover they’ve been sent on a mission that will almost certainly end in catastrophe.

The Derelict saga is a suspenseful mashup of hard military sci-fi, space opera, and mystery.

Some mysteries shouldn’t be solved. The post-apocalyptic series fans are describing as “one of the best post-apocalypse stories I’ve ever read.” Once infected, the virus shuts down organs, kills nerve impulses, and even reprograms the way we think. The virus becomes us. But the process takes eight hours. If the only remaining member of your family was infected, what would you do? Chris Smith has eight hours to get his infected daughter Maisie to the rumored cure or lose her forever. The only things in his way: a marauding army of killer zombies, a self-declared warrior goddess, and a secret buried deep in his past. They are bold, daring, reliable…and doomed. The salvage marines of Tango Platoon have gone up against everything from space pirates and resistance fighters to savage mutants and the heavily armed elite troopers of Helion Corporation. By all accounts they are some of the most battle-hardened veterans in the fleet and experts at hostile salvage operations. The marines are pulled off a low risk contract and placed at the vanguard of tremendous planetary-scale conflicts that will have them locked in furious battle for control of a subterranean underworld infested with brutal street gangs and monstrous creatures before pushing them to the bleeding edge of the known universe and pitting them against a city of the mechanized undead. Four hundred years in the future, the most dangerous criminals are kept in suspended animation aboard prison ships and ‘rehabilitated’ in a shared virtual reality environment. But Miska Storrow, a thief and hacker with a background in black ops, has stolen one of these ships, The Hangman’s Daughter, and made it her own. Controlled by explosive collars and trained in virtual reality by the electronic ghost of a dead marine sergeant, the thieves, gangsters, murderers, and worse are transformed into Miska’s own private indentured army: the Bastard Legion. Are the mercenaries just for fun and profit, or does Miska have a hidden purpose connected to her covert past? The Scattered and the Dead, Book 1.5 by Tim McBain and L.T. Vargus
Narrated by the Authors

The Scattered and the Dead saga continues in this short volume featuring four returning point of view characters and two new ones.
Survival. Murder. Snow.

Winter is here. The cold spreads over the land, shriveling and choking out all the plant life. Harsh. Unforgiving. The first winter without electricity will surely claim more human lives as well. The isolation may do more damage than the cold, however. Too much time alone drives people to unthinkable acts. 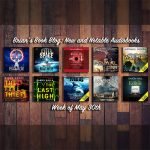 Week of May 30th New and Notable Audiobo 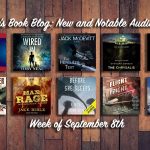 May 26th: New And Notable Audiobooks 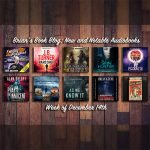 One thought on “New and Notable Audiobook Releases (Week of February 1, 2017)”