The New One by Mike Birbiglia & J. Hope Stein (Narrated by the Authors) 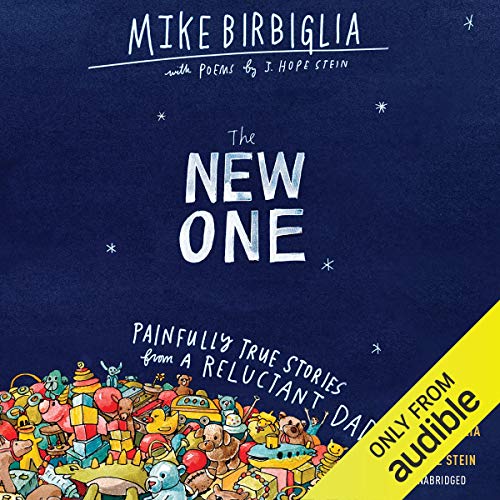 As Great As I Thought It Would Be

First off I need to warn you that I am a huge Birbiglia comedy fan, so when I saw that this was coming out and especially coming out in audio as well, I knew I was going to have to pounce on it. I’m glad that I did.

If you’re a fan of Birbig’s comedy like I am – about 80-90% of his parts of The New One aren’t new to you. They’re the same stories that he tells on stage, but that’s okay. There were a few details that don’t make the comedy productions that sneaked (I want to write snuck but I don’t think that’s right) into these – and some other stories that I’ve never heard in any of the specials I’ve seen of the few times I’ve seen him live.

Where this book really shines is the addition of his wife’s poetry. J. Hope Stein’s poetry (especially when Mike was talking about it) really make this book. Her warm hug-like voice delivering something hilarious lines with a straight face made me smile. Some of the poems were serious and some were funny. All of them added to my enjoyment of this book.

Obviously, I listened to the audiobook version of it and there were a few times that you could hear the two of them chuckle when reading their own words and that is something that might bother some people – but it just added to my enjoyment of this one. The New One works well as a digital book and as well as this audiobook. Birbiglia’s words jump off of the page and if you’re a reluctant dad (or reluctant dad-to-be) you’ll find this book even funnier.

With laugh-out-loud funny parenting observations, the New York Times best-selling author and award-winning comedian delivers a book that is perfect for anyone who has ever raised a child, been a child, or refuses to stop acting like one.

In 2016 comedian Mike Birbiglia and poet Jennifer Hope Stein took their 14-month-old daughter Oona to the Nantucket Film Festival. When the festival director picked them up at the airport she asked Mike if he would perform at the storytelling night. She said, “The theme of the stories is jealousy.”

Jen quipped, “You’re jealous of Oona. You should talk about that.”

And so Mike began sharing some of his darkest and funniest thoughts about the decision to have a child. Jen and Mike revealed to each other their sides of what had gone down during Jen’s pregnancy and that first year with their child. Over the next couple years, these stories evolved into a Broadway show, and the more Mike performed it the more he heard how it resonated – not just with parents but also people who resist all kinds of change.

So he pored over his journals, dug deeper, and created this book: The New One: Painfully True Stories From a Reluctant Dad. Along with hilarious and poignant stories he has never shared before, this audio is sprinkled with poetry Jen wrote as she navigated the same rocky shores of new parenthood.

So here it is. This book is an experiment – sort of like a family.

These Are My Friends On Politics by Bill

Audiobook: The Only Girl in the World by