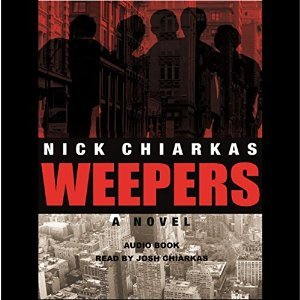 You write what you know… and Chiarkas has done that

This was one of those books I went out of my typical comfort zone to read.  I loved the back story of the author and what the book was about, but it’s not my typical genre (so just know that with this review).

The audiobook was narrated by Josh Chiarkas and wasn’t good but wasn’t bad.  He has a very blue-collar voice (which I assume the author wanted to go with). You could tell that Josh either grew up in the city or is talented enough to emulate a city dweller’s type voice.  The narration told the story in a gritty way (which fits with the tone of the novel).

I enjoyed the book and I can tell that Nick wrote what he knew.  The details and information that he wrote out were very based-in-fact and I think that’s what made this book so “real” for me. For me, the story would weave from “I don’t believe it” to very believable when different things happened (but I didn’t grow up in that type of neighborhood).  I can tell that the author really did his research before writing a debut novel like this.

If it moves away from you, it*s food; if it moves toward you, you*re food. The 1957 murder of an undercover cop in a New York City housing project has unexpected ties to the unsolved disappearance of a young father walking home in those same projects with his son, Angelo, on Christmas Eve six years before. The only witness to the cop killing is Angelo, now 13, while on his way to seek his own revenge in the early morning hours. The killers know he saw them. A series of gripping events forge a union between a priest, a Mafia boss, a police detective, and Angelo, a gang member. In the end, Weepers shows us that the courage of the underdog despite fear and moral ambiguity will conquer intimidation. Nick Chiarkas grew up in the Al Smith housing projects in the Two Bridges neighborhood on Manhattan’s Lower East Side, where Weepers takes place. When he was in the fourth grade his mother was told by the principal of PS-1 that, “Nick was unlikely to ever complete high school, so you must steer him toward a simple and secure vocation.” Instead, Nick became a writer, with a few stops along the way: a New York City Police Officer; the Deputy Chief Counsel for the President’s Commission on Organized Crime; and the Director of the Wisconsin State Public Defender Agency. On the way he picked up a Doctorate from Columbia University; a Law Degree from Temple University; and was a Pickett Fellow at Harvard. How many mothers are told their child is hopeless? How many kids with potential simply surrender to desperation? That’s why Nick wrote Weepers–for them.

Nick’s other publications are law books; books dealing with Criminal Organizations and Enterprises; and articles, two of which have been translated and published in Japan. Weepers is Nick’s first novel. Forthcoming novels include: Nunzio’s Way, Black Tiger Tea, and Blue Bounty.