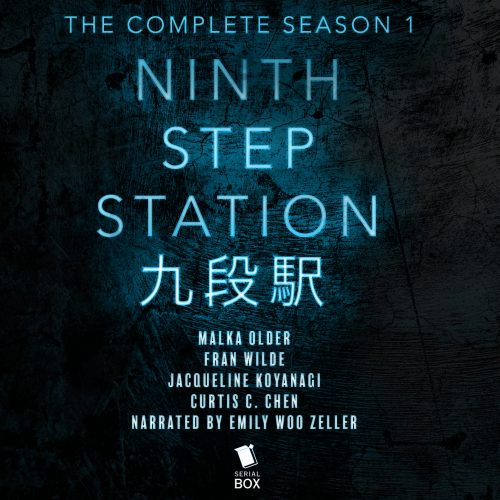 Episode One: The Faceless Body

If you’re unfamiliar with serialized fiction – it’s the idea that you take a story and separate it out into episodes – like a TV show.  These are usually released on a website or as a podcast. I’ll be reviewing each episode separately as they come out to provide an episode by episode review of the story. I’ll try to remember to link to the next and previous episodes where necessary.

The first thing that you notice about Ninth Step Station is the ambiance set by the sound engineer(s) at Serial Box.  There are constant sound effects (really ones that set the ambiance and allow for the reader to really get into the book). The book opens up where there is rain in the background, it then moves into an office and you can hear elevators, keyboards, phones, etc while there.  It’s a cool idea and I think works really well with the story.

The second thing you notice is that Emily Woo Zeller does a fantastic job narrating the story.  She’s able to seamlessly switch between characters and help set the scenes and mood even more.

Finally, we get into Older’s writing. I am deeply ashamed that this is my first book of hers even though Eliot Peper and many others have been telling me to read her work.  I now know why.  She’s able to in the first hour set up a world, a feeling, an ambiance, and already throw in some drama and tension between characters. Speaking of the world-building. She writes about a near-future world where Tokyo is torn apart from conflicts and one where things feel the same but don’t at the same time.

We’re introduced to both main characters within the first episode and I’m glad that Older was able to write in some of the tension right from the get-go.  It helps build that unease that I was hoping this book would have.

Overall, a great first story and my first ever Serial Box episode. Well made, produced, and performed. I think that they really helped bring Older’s words right off the page and into your mind.

Years of disaster and conflict have left Tokyo split between great powers. In the city of drone-enforced borders, bodymod black markets, and desperate resistance movements, US peacekeeper Emma Higashi is assigned to partner with Tokyo Metropolitan Police Detective Miyako Koreda. Together, they must race to solve a series of murders that test their relationship and threaten to overturn the balance of global power. And amid the chaos, they each need to decide what they are willing to do for peace.