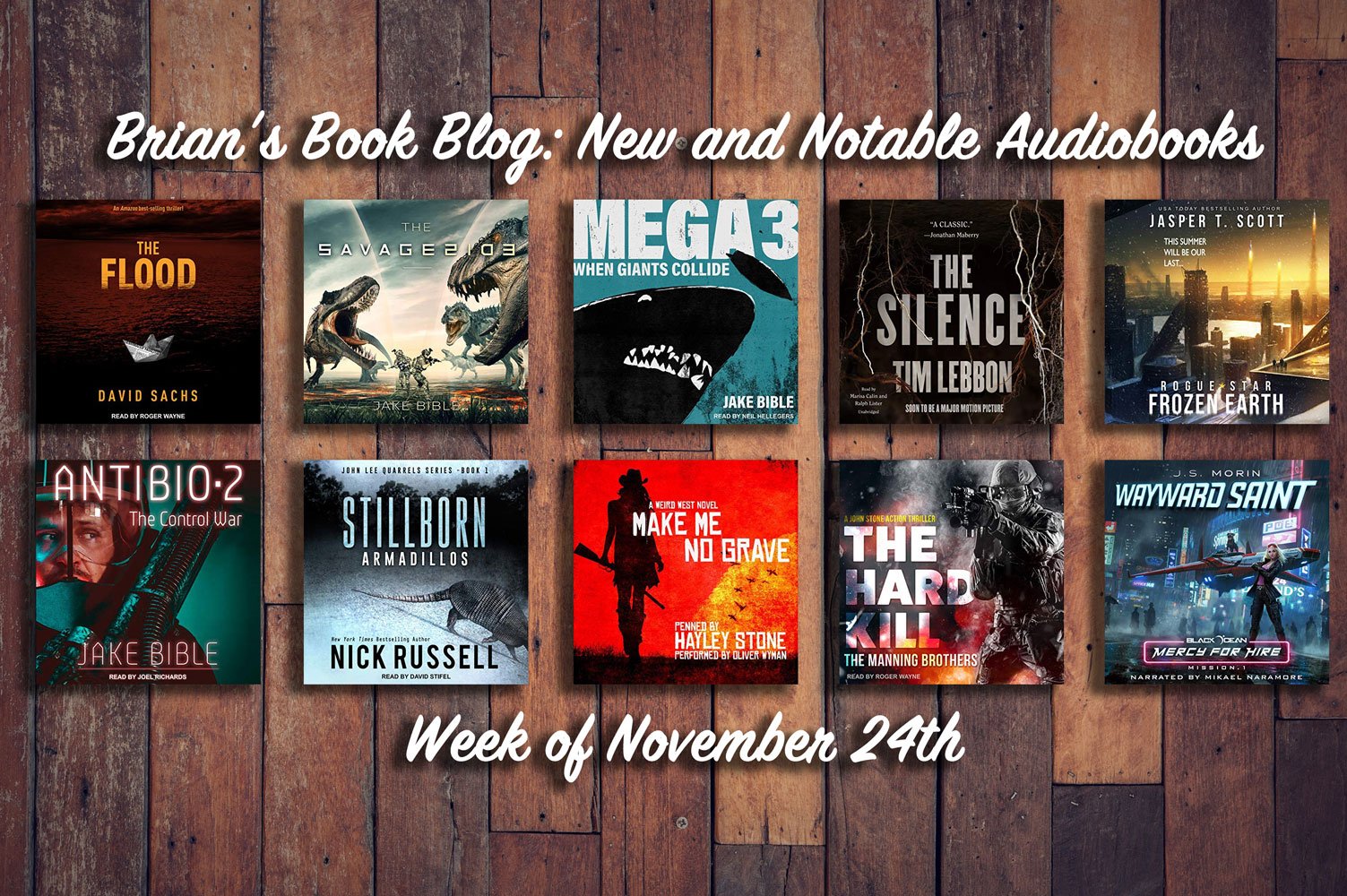 Welcome to Brian’s Book Blog’s weekly New and Notable Post for the Week of November 24th.

When the flood hits, America’s East Coast is evacuated by every means possible. Trains, buses, and an unending line of cars head inland. All manner of boats and ships aid in rescues along the docks of New York.

Brooklyn paramedic Travis Cooke had dreamed of reuniting his family, but not like this. Escaping New York with his son and the ex-wife he still loves – and her new husband – they find themselves evacuated on the luxury cruise ship, the Festival of the Waves.

Hours later, the Festival lies dead in the open Atlantic: no power, no communications, and nowhere near enough food. Thousands of evacuees on board find themselves alone in a big ocean. For those that escaped the flood, the nightmare is just beginning. 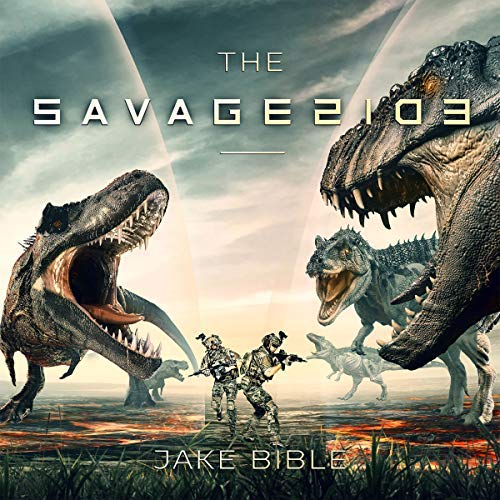 The Savageside by Jake Bible
Narrated by Andrew B. Wehrlen

The Turns have stopped!
The time bubbles are gone!
And now everyone is trapped Flipside!

Operator Trevon Cash, along with his friends, his colleagues, and an international coalition of military personnel, must fight horrific new dinosaurs, survive a landscape in constant turmoil, and somehow figure out how to get back to their time while their modern technology fails, new mega-predators attack, and a Russian army bears down on them!

The once stable Flipside is now the nightmarish Savageside! 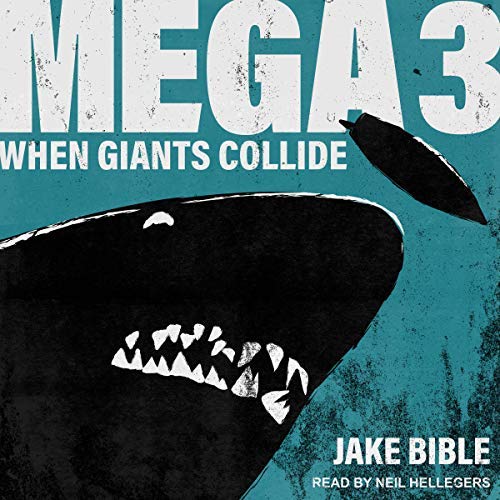 Team Grendel has made some enemies. The team of ex-Navy SEALs, scientists, and highly trained misfits may have saved countless lives, but they are now paying for their heroism. Pursued relentlessly across the globe by an unknown group, Team Grendel finds themselves disavowed by the United States and other sovereign nations for their work outside legal channels.

Across the South Pacific ocean, Team Grendel must flee, headed for a sanctuary only their boss and benefactor knows about, fighting for their lives the entire way. But, as is the luck of Team Grendel, there is more than just human enemies chasing them down.

As they battle their way across the open waters, something so giant, so relentless, and so hungry, pursues them, ready to end their war on the monsters of the deep. The mother of their nightmares has come to the surface, and it will not stop until the Team is dead and devoured!

Yet, even a monster shark of nightmarish proportions has its own enemy, and Team Grendel is about to find out what happens when giants collide!

In the darkness of a vast cave system, cut off from the world for millennia, blind creatures hunt by sound. Then there is light, there are voices, and they feed. Swarming from their prison, they multiply and thrive. To scream, even to whisper, is to summon death.

Deaf for many years, Ally knows how to live in silence. Now, it is her family’s only chance of survival. They must leave their home, shun others, and find a remote haven where they can sit out the plague. But will it ever end? And what kind of world will be left?

A dead star is headed for Earth…The shift in Earth’s orbit will unleash a new ice age…And this summer will be our last.

The news breaks – Logan Willis’s life is falling apart: he lost his job and found out that his wife is cheating on him all in the same day. Thinking that his world has ended, Logan checks into a hotel and turns on the TV to see that he’s not far wrong – radio telescopes have detected mysterious signals coming from inside our solar system, and the source is moving toward us at over 500 miles per second. The media concludes that these signals must be of an alien origin. Still reeling from the news, Logan gets a phone call from his brother-in-law. Richard is talking crazy about the end of the world again, but this time he doesn’t sound so crazy.

A deadly conspiracy unravels – Meanwhile, Richard, who is an astronomer working with the James Webb Space Telescope, is at the White House briefing the president to announce what he and the government have known for almost a decade: aliens are not invading, a frozen ball of gas is. The so-called rogue star is predicted to make a near pass with Earth, disrupting our orbit and unleashing an ice age, the likes of which we haven’t seen for millions of years.

We’re putting a colony on Mars – Government insider and billionaire Akron Massey has received a steady flow of funding over the past decade for his company, Starcast, to put a colony on Mars. Over the same period he’s been using his personal fortune to create a colony closer to home where he plans to ride out the coming storm along with a thousand of the smartest people on the planet. Humanity will need seeds to plant in the ashes after the chaos clears.

And wars ignite – When the true nature of the threat becomes known, the nations of Earth prepare to fight over all the warmest parts of the planet. But as war fleets set sail and armies begin marching south, a stunning discovery is made that will change a lot more than just the weather….

Coffin Squad, a mix of GenWrecks and GenSOF operators, races from GenWreck base to GenWreck base, only to find death and destruction. The abominations of the Sicklands – the cooties – have systematically destroyed everything they have come across, all in the name of an entity that no one can find: the Other.

Now Coffin Squad, with the help of some unlikely allies, must leave the Sicklands and dive back into the Clean Nation stronghold of Caldicott City in a desperate attempt to keep GenSOF Command intact. Mysteries greet them, hordes of diseased citizens attack them, and one person shatters their perception of what it means to live in a world post-antibiotics. And it all leads back to the Other and the place where everything started – Control.

Life is already complicated enough for John Lee Quarrels, what with his estranged wife dropping in for unannounced sleepovers, her oversexed sister tempting him, his pot smoking ponytailed grandfather growing his own stash, his Elvis obsessed grandmother, and being caught smack dab in the middle of a power struggle between the Sheriff and Chief Deputy. But when a road construction crew unearths the skeletons of three murder victims, John Lee suddenly finds himself on the trail of a killer who may well have died long before the deputy was even born. And then a mysterious sniper begins shooting at deputies….

As sultry as a Florida back road in August, as mysterious as the South’s live oak trees dripping with Spanish moss, and as deadly as a copperhead strike, New York Times best-selling author Nick Russell’s new John Lee Quarrels series will keep you listening late into the night. 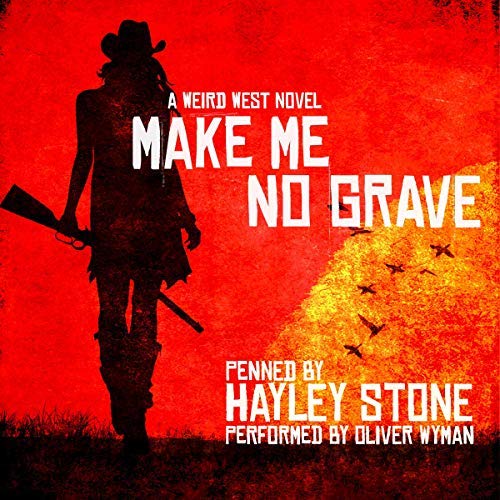 Marshal Apostle Richardson faces off against bloodthirsty outlaws, flesh witches, ruthless vigilantes, and more in this gritty, magical re-imagining of the Old West.

Almena Guillory, better known as the Grizzly Queen of the West, has done plenty to warrant the noose, but US Marshal Apostle Richardson enforces the law, he doesn’t decide it. When a posse tries to lynch Almena ahead of her trial, Apostle refuses their form of expedited justice – and receives a bullet for his trouble. Almena spares him through the use of dangerous flesh magic but escapes soon after saving him.

Weeks later, Apostle fears the outlaw queen has returned to her old ways when she’s spotted terrorizing Kansas with a new gang in tow. When cornered, however, Almena makes a convincing case for her innocence and proposes a plan to take the real bandits down. Working with a known killer opens Apostle up to all sorts of trouble, not the least being his own growing attraction toward the roguish woman. Turning Almena away from vengeance may be out of the question, but if he doesn’t try, she’ll wind up right where the law wants her: at the end of a rope.

And if Apostle isn’t careful, he’ll end up joining her.

If you like Red Dead Redemption and Lila Bowen’s Wake of Vultures, you’ll love this gun-blazing weird Western.

Retired Army Ranger John Stone has settled into his life as a bar owner in Great Falls, Montana. But news about the death of a brother-in-arms and the kidnapping of his goddaughter shakes his world apart.

John discovers the murder and abduction might involve the ex-wife of his fallen brother and a prototype technology that could threaten the security of the free world.

Now, with time running out, John must rely on the abilities of his former life to save his goddaughter from the same fate as her father.

They want power. He’s going to bring them a war.

The galaxy’s worst bounty hunter just might be its most relentless hero.

Esper may dress the part. She has her own ship. She even carries a blaster – not that she ever uses it.

But she violates the cardinal rule of the galaxy’s most cold-blooded profession: get paid.

At least she’s not alone. Her partner, Kubu, is an alien who gets mistaken for a dog.

One is a wizard on the run from her past. The other is a lovable eating machine. Between them, they haven’t got a ruthless bone in their bodies.

But when a client hires them, they’ll do whatever it takes to bring a target home safely.

This time, it’s a teenage kidnapping victim, and Esper and Kubu will crisscross the galaxy to track her down and make sure she’s safe.

Wayward Saint is the first mission of Black Ocean: Mercy for Hire. It follows the exploits of a pair of do-gooder bounty hunters who care more about saving the day than getting a payday. Mercy for Hire builds on the rich Black Ocean universe and introduces a colorful cast for new and returning listeners alike. Fans of vigilante justice and heroes who exemplify the word will love this series.
Grab your copy and support the cause of justice.