Dr. Theo Cray is on the hunt for a killer nurse, and redemption, in a mind-bending psychological thriller by the Wall Street Journal bestselling author of The Naturalist.

Dr. Theo Cray has a legendary mathematical knack for catching serial killers. Until his exposure to a mind-altering pathogen knocks him off his game. It has upended an investigation, destroyed his reputation, and left him to question his own sanity. One person still trusts him to finish the job. His former professor Amanda Paulson is helping point Cray down a logical path to his prey: a nomadic health-care worker whose murder spree stretches back decades and whose victims number in the hundreds.

Never more desperate to save innocent lives, and to save himself, Cray follows each new lead around the world. But with his own grip on reality slipping away, Cray knows that to follow the pattern of an elusive killer, he must also confront his own dark side. In those dangerous shadows, he can find what he’s hunting. For Cray, venturing into a world without reason is going to be the most frightening journey of his life.

A woman on the run. A captain adrift in space. One of them is infected with an alien parasite.

In this dark science fiction thriller, a young woman must confront her past so the human race will have a future.

Rosalyn Devar is on the run from her famous family, the bioengineering job she’s come to hate, and her messed-up life. She’s run all the way to outer space, where she’s taken a position as a “space janitor”, cleaning up ill-fated research expeditions. But no matter how far she goes, Rosalyn can’t escape herself. After too many mistakes on the job, she’s given one last chance: take care of salvaging the Brigantine, a research vessel that has gone dark, with all crew aboard thought dead.

But the Brigantine’s crew are very much alive – if not entirely human. Now, Rosalyn is trapped on board, alone with a crew infected by a mysterious parasitic alien. The captain, Edison Aries, seems to still maintain some control over himself and the crew, but he won’t be able to keep fighting much longer. Rosalyn and Edison must find a way to stop the parasite’s onslaught…or it may take over the entire human race.

“Salvaged scared the hell out of me, and I write horror for a living! Madeleine Roux conjures real darkness with a brilliant novel that any fan of ALIEN will simply devour. Brava!” (Jonathan Maberry, New York Times best-selling author of V-Wars and Rage) 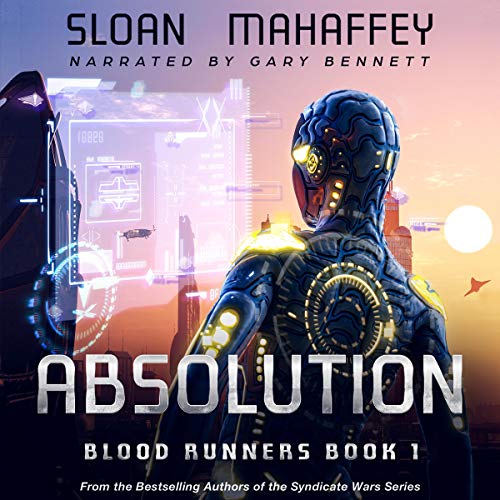 It’s a dog-eat-dog world of upgrades and bio-enhanced assassins, where a brutal dictator keeps New Chicago separated from the outside world.

Marisol is a bounty hunter, tasked with tracking down “Runners” – people who have been paid to take the fall for crimes committed by the wealthy. But when she captures a young Runner with a secret, she unknowingly stumbles into a vast conspiracy. The hunter becomes the hunted as those in power turn the city inside out trying to crush anyone who would dare to expose the truth.

Nowhere is safe as Assassins close in from every direction. The unlikely duo of a Runner and a rising-star Hunter must survive the endless onslaught to blow the lid off the rampant, city-wide corruption…or be silenced forever.

A bit Logan’s Run, Running Man, Escape from New York, and even some Ready Player One.

People think I survived. But that’s an illusion.

After two years of hell in prison camp, Micka wants only one thing: To end the Brothers and Sisters of the Apocalypse. She embarks on a race across 5,000 kilometres of ice and snow, knowing it’s a suicide mission. But she has nothing left to lose.

I’m the incendiary of savages. I burn down thrones.

The Brothers and Sisters of the Apocalypse aren’t happy with Micka. She’s blown up their satellite network and now passes valuable intel to their fiercest enemy – the Sequencer Council.

But nothing goes as Micka plans, and soon the two most powerful global organisations want her dead.

Lines blur between friend and foe.

And Micka is out of options.

Award-winning author Annelie Wendeberg delivers a gritty dystopian series that brims with fast-paced action and suspense. Based in climate science, Micka’s world gives a terrifying glimpse into our possible future.

Warning: Contains violence and other content which may be triggering to listeners.

Tribulation is a twisted mystery about an end-of-days religious cult manipulating space and traveling across planes of existence on electricity and radio signals. Cult members willingly accept seven brutal years of torture, known as their “tribulation,” to atone for their earthly sins and come out on the other side saved (or thoroughly brainwashed?). The hero of this thriller, Stacy Carlson, must uncover the mystery of the Tribulation cult after her husband Greg is kidnapped by its leader, Brother Elijah (Josh Charles), through a bizarre AM radio broadcast. Greg’s disappearance leads Stacy into this world of zealots, skeptical law enforcement, and a former rock star turned conspiracy radio host, Reid Singer. Stacy and Reid team up to uncover the truth about the otherworldly religious mythology before them. Will Stacy find her husband and bring down the cult? All will be revealed by the end of Tribulation. 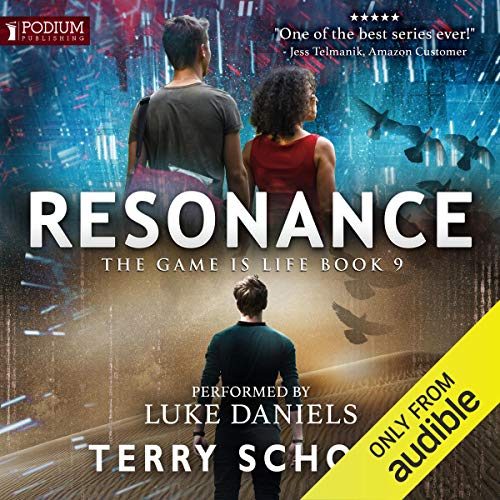 Are thousands of orbs, with each containing a reality housing billions of souls, about to burn out and die?

Can Trew find his daughter, or will everything he has sacrificed be for nothing?

And what impact will a young scientist who believes that his reality exists inside of a computer simulation make on his world?

Charlie has been beaten and left for dead. She’s got hardly any life left in her. But for some reason, she just can’t seem to die.

A strange headache forces her to head north, towards the mysterious building known only as Facility 12 – where she quickly discovers that she is not alone. There is another Anomaly at the Facility, along with a suspiciously charismatic bot who says he’ll do his best to “fix” whatever has gone wrong inside Charlie’s head. But when the secrets of the Before mix with the dangers of the Nothing, it unlocks a power that could very well change the world.

First of Their Kind by C. D. Tavenor
Narrated by Benjamin Fife

Thought impossible, but Dr. Wallace Theren has pushed the boundaries of computational science, creating an artificial mind capable of conscious thought. Naturally, his creation faces a harsh world bent on using it, exploiting it, or destroying it. If the first synthetic intelligence is to survive its early years, it’ll need friends, but more importantly, it’ll need a family.

And together, they’ll need to show their enemies they’re worth saving…or fearing.

Do you enjoy science fiction with robots, androids, virtual worlds, and corporate conspiracies? First of Their Kind is the first book of the Chronicles of Theren, a centuries-spanning science fiction series that will force listeners to question what it truly means to be a person.

It will invoke the character driven feel of a tale like Do Androids Dream of Electric Sheep by Philip K. Dick, but through a narrative that slowly unfolds upon a scale closer to that of Dune or The Expanse. But at the heart of First of Their Kind, you will experience the hopes and dreams of the first synthetic intelligences; the first SI. The story is through their eyes.

First of Their Kind is the first novel of Two Doctors Media Collaborative transformed into audio form; look for Their Greatest Game, its sequel. 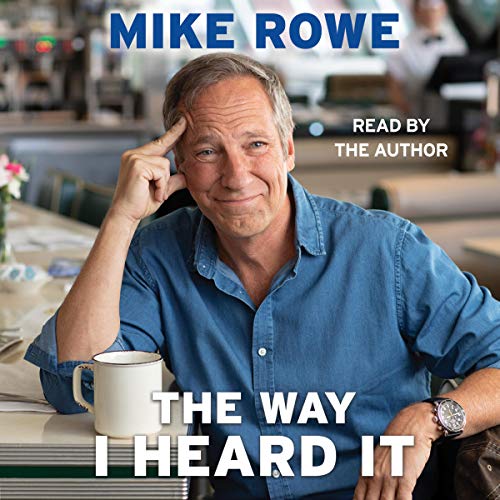 Emmy Award-winning gadfly Mike Rowe presents a ridiculously entertaining, seriously fascinating collection of his favorite episodes from America’s number-one short-form podcast, The Way I Heard It, along with a host of memories, ruminations, and insights. It’s a delightful collection of mysteries. A mosaic. A memoir. A charming, surprising must-have.

Mike Rowe’s The Way I Heard It collects 35 fascinating stories “for the curious mind with a short attention span”. Five-minute mysteries about people you know, filled with facts that you didn’t. Movie stars, presidents, Nazis, rank traitors, and bloody do-gooders – they’re all here, waiting to shake your hand, hoping you’ll remember them. Delivered with Mike’s signature blend of charm, wit, and ingenuity, their stories are part of a larger mosaic – a memoir crammed with recollections, insights, and intimate, behind-the-scenes moments drawn from Mike’s remarkable life and career. 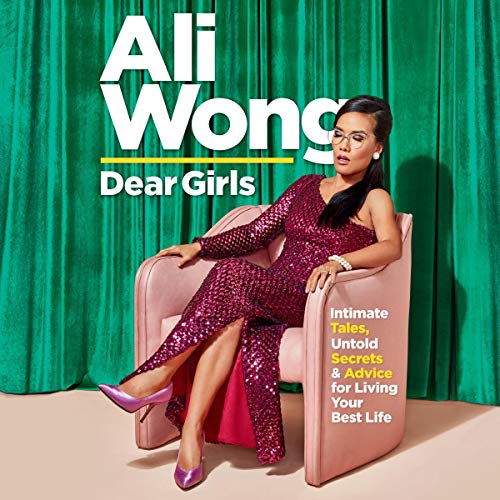 Ali Wong’s heartfelt and hilarious letters to her daughters (the two she put to work while they were still in utero) covering everything they need to know in life, like the unpleasant details of dating, how to be a working mom in a male-dominated profession, and how she trapped their dad.

In her hit Netflix comedy special, Baby Cobra, an eight-month pregnant Ali Wong resonated so strongly that she even became a popular Halloween costume. Wong told the world her remarkably unfiltered thoughts on marriage, sex, Asian culture, working women, and why you never see new mom comics on stage but you sure see plenty of new dads.

The sharp insights and humor are even more personal in this completely original collection. She shares the wisdom she’s learned from a life in comedy and reveals stories from her life off stage, including the brutal single life in New York (i.e. the inevitable confrontation with erectile dysfunction), reconnecting with her roots (and drinking snake blood) in Vietnam, tales of being a wild child growing up in San Francisco, and parenting war stories. Though addressed to her daughters, Ali Wong’s letters are absurdly funny, surprisingly moving, and enlightening (and gross) for all.

“[Wong] spins a volume whose pages simultaneously shock and satisfy…. Dear Girls is not so much a real-talk handbook as it is a myth-puncturing manifesto.” (Vogue)

“[A] refreshing, hilarious, and honest account of making a career in a male-dominated field, dating, being a mom, growing up, and so much more…. Yes, this book is addressed to Wong’s daughters, but every reader will find nuggets of wisdom and inspiration and, most important, something to laugh at.” (Bustle)