One Man’s War by Steven Savile (Narrated by R.C. Bray) 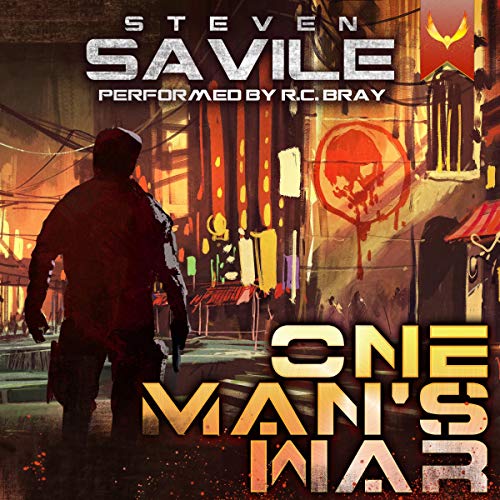 I don’t always like to admit that I didn’t read the synopsis before jumping into a book – but that makes more sense when you know the author or the story.  That was not the case in One Man’s War.  I basically saw the publisher and narrator – coupled with the artwork and decided to take the dive.

It seems to tell the story of “Bleeders” aka what we would call Mercenaries.  It’s also very much a book about revenge (hence the title).  But, going into it blind did not take away from my enjoyment at all.

Savile’s writing was right up my alley – and also lent itself to Bray’s narration perfectly.  He wrote a serious story about Guerro’s revenge – but he sprinkled funny parts within (especially once he really started to hatch his plan). Bray’s narration was able to add that little flair to it to turn it from a good book to a great one.

While One Man’s War is not a long book – I don’t think that Savile left anything out.  It had the character building, world building, and overall storytelling that you’d expect out of a 12 hour book without the added length.  I’m sure he could tell stories that lead up to this one to give some more backstory (other than the flashback they talk about at the midway point), but I didn’t feel like I was ripped off.

I did look up to see if Savile had written any other Sci-Fi stories before finishing this one.  I just figured he had to have some others since this was such a tight story. He’s written other books but none seems to fit the same mold as this one. I hope he continues to write more like this.

There’s no good way to prepare yourself to die….

Guerro runs a kill team. They’re good. Better than good. Or they were, until they walked into an ambush that wiped his team out and left Guerro for dead.

All the evidence suggests they were betrayed, but by who, and why?

Determined to avenge his team and settle old scores, Guerro embarks upon a one-man war, knowing that whoever put the kill order out on his people is still out there, watching for him to show his face so they can end him.

A hard-biting SF thriller in the vein of Blade Runner, Altered Carbon, and Titanborn.