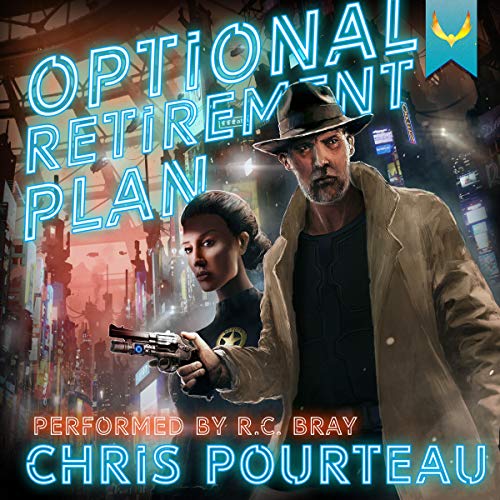 Another book that dragged me in with just the cover.  The book was fully sold by seeing the Aethon Audio logo at the top and realizing that R.C. Bray narrated it.  Granted, I don’t want to take away form Pourteau at all here. He wrote a fantastic book, but I didn’t know anything about him before this.  I can’t wait to read/listen to more books from him in the near future.

So, I went into Optional Retirement Plan with no real understanding of what the book was going to be about other than what the title implies.  I did read the first line of the synopsis after I started the book “When retiring isn’t an option, it’s kill or be killed.” and that feels like a pretty darn good summary itself.  The entire book focuses around Fischer’s attempted retirement (which, in reality, is someone giving him 3 days before he puts a hit out on him).  While running away, a ton of other things end up happening and it turns into a blast of a book.

Minus his looks, I kept feeling like this was a combination of The Bourne Identity and the Hitman games.  It had the Bourne feel because of his “Old Timers Disease” (aka Alzheimer’s) – there were moments when that would really flare up and other moments of clarity.  I thought that Pourteau did a great job describing it (and also envisioning a future where it’s basically eradicated).  It reminded me a little bit of the Hitman games due to his obvious former job and just certain moments had that games feel to them.

This book was funny as well, there are moments when Fischer talks to and others where he’s basically pleading with himself. Every time this happened though, it was in a sort of sarcastic tone (one the Bray is VERY good at delivering in the audiobook). It cause a somewhat heavy book to feel much lighter.

Pourteau’s overall vibe in this book was one that I enjoyed.  I can’t really describe it or put it into words, but it was something that I found easy to read and understand. The book flew by pretty fast.  There weren’t a ton of wasted scenes and the backstory was put in throughout the book (instead of shoved into the beginning).

Overall, a book that I enjoyed and one that flew by.  I can’t wait to see what else Pourteau releases in audio and I hope that he’s able to continue working with top notch publishers and narrators like Aethon and Bray.

When retiring isn’t an option, it’s kill or be killed.

Stacks Fischer is a killer for hire. For more than three decades, he’s loyally served the Syndicate Corporation as its most-feared and respected enforcer around the solar system. He’s buried the company’s dirty laundry six feet deep, no matter who had to be taken out to do it.

Now, Stacks has a problem – he’s losing his mind to incurable form of dementia, and unwittingly spilling corporate secrets in public.

When SynCorp decides Fischer has outlived his usefulness, they decide it’s time to permanently retire him. But Stacks isn’t quite ready to go. With every one of SynCorp’s Five Factions gunning for him – and his own mind slowly rebelling – Fischer leads a pack of would-be assassins in a final, deadly chase across the solar system.

The old hit man refuses to fade quietly into oblivion at the hands of his disease or the business he’s dedicated his life to. He’s choosing an Optional Retirement Plan.

Don’t miss this pulse-pounding science fiction thriller filled with twists that will leave you on the edge of your seat. It’s perfect for fans of Titanborn, The Expanse, and Minority Report.