The Others by Jeremy Robinson (Narrated by R.C. Bray) 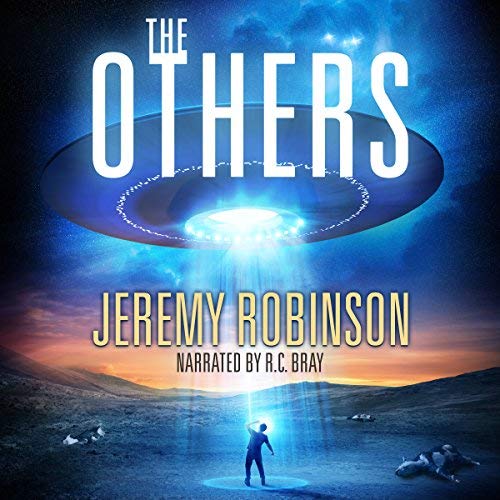 The Others Didn’t Disappoint

My favorite sci-fi books are the ones that seem believable, those that are based on a premise (like aliens). Books that seems a bit out there but are so well done you occasionally forget that you’re reading fiction. They’re so unsettling that you get a bit nervous. Jeremy Robinson’s novel The Others is one of those books.

The Others combines all of the things that make the hair on the back of your neck stand up a bit with a unique take on alien origins, a pinch of corruption, great imagery detailing the landscape of the southwest, and a number of honorable people determined to find answers and protect the ones they care about most in this world.

Robinson drew me in right away with his characterization of private investigator Dan Delgado and his elderly (yet feisty) longtime assistant Wini. Both characters are immediately likable. They are fiercely loyal to each other and have secrets that create some intrigue, a trend that continues throughout the book as additional characters are introduced.

The Others opens with an apparent abduction that felt different from a stereotypical alien abduction and had me wondering if I was being duped. Was it a parental kidnapping, trafficking, or something otherworldly? What was the motive? Where is the child? The answers to these questions come slowly as the story progresses, with a thickening plot and building mystery.

RC Bray’s narration was as I’ve come to expect from him–spot on. His tone and pace paired well with the book’s first-person narrative and was a great fit for The Others’ protagonist, Dan.

If you’re searching for a story about short (or extremely tall),  grey extraterrestrials with disproportionately large heads, huge black eyes, and flying saucers, this book is not for you. If you’re interested in a fresh take on aliens, with a healthy dose of conspiracy, a trafficking ring with connections to a fundamentalist cult, and some unlikely do-gooders to cheer on (along with your obvious hero, the private investigator), take a listen, I don’t think The Others will disappoint.

Dan Delgado is a private investigator. When it comes to finding cheating spouses, corporate thieves, or runaway teenagers, he’s unenthusiastic, and unmatched. As a former San Francisco detective, he misses more meaningful work, but he hasn’t had the heart for it since his wife’s death five years prior. That is, until a phone call from a distraught mother, an illegal immigrant who can’t go to the police, puts him on the hunt for a missing little girl.

By the time he reaches the mother’s small home, she’s missing, too. The circumstances are strange, but when a team of heavily armed mercenaries arrive, Delgado is convinced there is more going on than a simple kidnapping.

Joined by his wise-cracking elderly assistant, a gun-toting pastor, and a UFO enthusiast Uber driver, Delgado follows the clues west, to Colorado City, a town cleaved in two by the 37th parallel, also known as the UFO Highway. In a town infamous for fundamentalist Mormon cult activity, they uncover evidence of a massive child-trafficking ring whose ringleaders might not be human.

Delgado and crew are plunged into a dangerous world of corporate competition, UFO lore, and government cover-ups. While they hunt for answers, they’re pursued across the Southwest by high-tech mercs, brainwashed cults, and beings whose true identity has been concealed since 1947.

…he must risk the world.

UFOs and alien abductions remain some of the most hotly debated and mysterious subjects of the 21st century. In the decades since 1960, with reports of strange encounters on the rise, 13 million people have gone missing worldwide and never been found. The Others takes a fast-paced, unique, and moving look at the phenomenon that has fueled Jeremy Robinson’s imagination since several sightings, strange happenings, and visits with renowned UFO investigator, and family friend, Raymond Fowler.

Also by this author: Hunger, From Above, Herculean, Viking Tomorrow