This Would Be Paradise by N.D. Iverson (Narrated by Carly Robins) 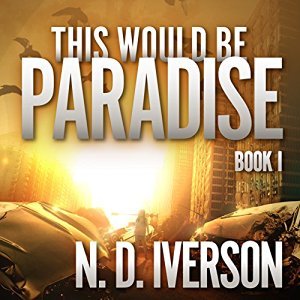 They Thought It Was Going To Be A Big Party

Far away from home when a global pandemic hits that turned people into flesh-eating monsters.  Not sure what to do, where to turn, or who to trust, two friends have to learn and adapt quickly in order to survive.

For those who are worried about language in audiobooks — there was some harsh language a few times in this book, but not every other paragraph.  Also, if you do not like graphically violent scenes (especially zombie-like eating scenes), then I would maybe avoid this book.

The narration for This Would Be Paradise is done by Carly Robins who does a pretty nice job.  The main character is a younger female who is going through an absolute catastrophe and Robins does a stand-up job portraying this young frantic female.  Her narration style isn’t my favorite, but this was more a character trait than a problem with Robins’ narration.

When the book first opened I wasn’t really sure how I was going to feel about it.  A party girl who seemed to be pretty brainless finds out that the world is quickly turning into flesh-eating monster — but as the story progressed I found myself liking her more and more.  Iverson’s writing allowed her to grow both as a character and as a person.

This Would Be Paradise was a quickly paced book with lots of action and action-like scenes that really helped move the story forward.  Iverson’s writing provided both good action and good dialogue without muddying up progress.

Overall, This Would Be Paradise wasn’t my favorite post-apocalyptic book, but it definitely wasn’t awful either.  The story itself was really good, but I felt that there just needed to be a bit more about the why for things.  Sometimes it felt like the girls were just doing things to do things instead of trying to make a plan.

In a world where a virus has spread turning most of the population into flesh-eating monsters, there are two friends partying it up in New Orleans when the infection hits. Far away from home, they are trapped and trying to make sense of all that has happened with the help of new friends and enemies along the way. Zombies aren’t the only thing to fear.