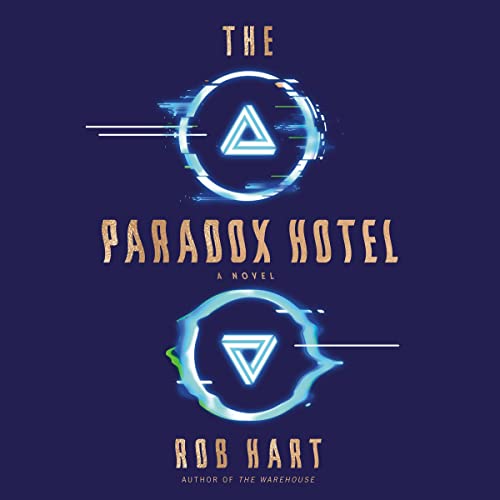 Lots of “What Ifs” About Time Travel

Having checked out and thoroughly enjoyed Rob Hart’s last novel, The Warehouse – I knew going into The Paradox Hotel I was going to be in for a treat. Then I see that it’s about timeports, time travel, murder, etc I got even more excited.

Hart was able to tell a story that really messed with my mind as I was reading it. The main character is, for lack of a better term, a time cop. Her job is to make sure that things aren’t stolen from time, people aren’t trying to mess with timelines, etc. Now that et cetera part is important here because playing with time so much apparently has an effect on people’s minds. It causes what Hart calls “slips” where they see things that aren’t there (or aren’t there… yet). Without going into too much detail – those play a big part in The Paradox Hotel, but there’s so much more.

I knew from the last book that things were going to be interesting as the book ramped up – but throwing in time travel (without actually doing much time traveling) and looking at it from the point of view of someone whose mind can’t be fully trusted made this such a suspenseful and hard to predict book. Every time I thought I had the timeline or people figured out… poof.

It’s almost as if this was a time-travel adjacent book. Like sure there’s lots of talk about time traveling but this is almost like “what happens to those who stay behind” mixed with a “what happens when the timeline starts to get messed up?”

This book kept me enthralled throughout and I kept coming back for more knowing that Hart wasn’t going to let me down. Coupled with the excellent narration by Emily Woo Zeller and this was a great book about forgiving yourself, finding yourself, grief, intrigue, and more.

An impossible crime. A detective on the edge of madness. The future of time travel at stake. From the author of The Warehouse….

Not that running security at the Paradox was ever really easy. Nothing’s simple at a hotel where the ultra-wealthy tourists arrive costumed for a dozen different time periods, all eagerly waiting to catch their “flights” to the past.

Or where proximity to the timeport makes the clocks run backward on occasion – and, rumor has it, allows ghosts to stroll the halls.

On top of that, some very important new guests have just checked in. Because the US government is about to privatize time-travel technology – and the world’s most powerful people are on hand to stake their claims.

January is sure the timing isn’t a coincidence. Neither are those “accidents” that start stalking their bidders.

There’s a reason January can glimpse what others can’t. A reason why she’s the only one who can catch a killer who’s operating invisibly and in plain sight, all at once.

But her ability is also destroying her grip on reality – and as her past, present, and future collide, she finds herself confronting not just the hotel’s dark secrets, but her own.

At once a dazzlingly time-twisting murder mystery and a story about grief, memory, and what it means to – literally – come face-to-face with our ghosts, The Paradox Hotel is another unforgettable speculative thrill ride from acclaimed author Rob Hart.

The Last Astronaut by David Wellington (