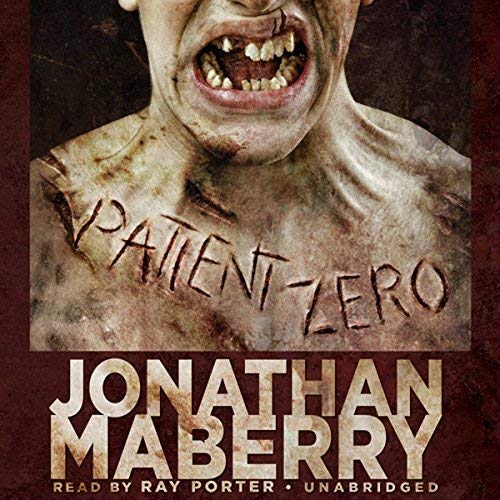 Never has a book been more recommended to me than Patient Zero by Jonathan Maberry – and, now that I’ve finished it, I can see why.  Maberry is a masterful storyteller allowing a whole new world to come to life before my eyes (and ears).

Joe Ledger is the perfect main character and easily one of the funniest and easiest to like character I’ve read in a book in quite some time.  He’s one of those guys who just say what’s on his mind and it’s almost always a smartass comment that cracked me up.

The science and technology that Maberry writes about in Patient Zero really ticked all the right boxes for me. Seriously, he had the technology behind the science right and the science dead on to the point of having me break out in a cold sweat when I really thought about it. A book with a title of patient zero usually swings and miss for me but not this one. Not at all.

I’m trying to figure out how to write a review on a book that I loved and one that I was told I was going to love.  I honestly tried to find things that bugged me about it for the first few minutes but I was instantly sucked into a world that I loved and I stopped trying to find any flaws.  This book was pure enjoyment and allowed me to be transported into a terrifyingly real world.

I’ve been putting off this book for apparently no good reason because it was awesome and now I’m at least 9 “main” Joe Ledger books behind.  I’m also glad that Ray Porter narrates them all.  He kicks butt as Ledger (and everyone else).  The scenes near the end (I won’t give up too much) with certain speech parts were done so well that they creeped me out.  A superb job.

When you have to kill the same terrorist twice in one week there’s either something wrong with your world or something wrong with your skills - and there’s nothing wrong with Joe Ledger’s skills. And that’s both a good and a bad thing. It’s good because he’s a Baltimore detective who has just been secretly recruited by the government to lead a new task force created to deal with the problems that Homeland Security can’t handle. This rapid-response group is called the Department of Military Sciences, or the DMS for short. It’s bad because his first mission is to help stop a group of terrorists from releasing a dreadful bioweapon that can turn ordinary people into zombies. The fate of the world hangs in the balance.

Jonathan Maberry is the New York Times best-selling and multiple Bram Stoker Award–winning author of Ghost Road Blues, the first of a trilogy of thrillers with a supernatural bite. A professional writer and writing teacher, he has sold more than 1.000 articles, 17 nonfiction books, six novels, and two plays.

Also by this author: Mars One, , Rage