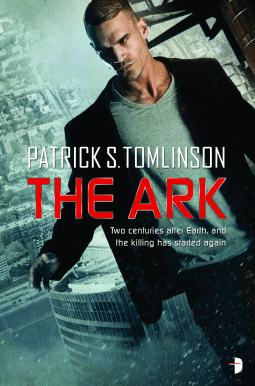 This was reminiscent of the old black and white detective stories that I watched as a kid, but kicked up a notch and throw out hundreds of millions of miles into space. Meet Bryan Benson a former sports all-star (at a game called Zero) who has been appointed to a detective/police position after retiring from the sport. Its a cushy job until one day someone turns up missing. Benson is forced into a string of different lies and stories in an attempt to find this missing man.

First things first, I loved the story. I don’t know what got me more, the descriptions throughout of the ark itself or the mystery aspect of it. Bryan Benson is an incredibly likable character, who can be sort of hard to get along with at time, but people (and I) chalk it up to being a big-headed former star athlete. He’s definitely someone who never gives up. He started pulling at the string and he wouldn’t stop until the sweater was totally unwound and he found his perpetrator. His ego and preconceptions get in his way from time to time, but that doesn’t stop him, just delays the inevitable slightly.

The point of view within was great. Bryan’s “voice” was very familiar to me, and after reading a bit about the author, Patrick S. Tomlinson, I figured out why. Tomlinson is a stand-up on top of being an author — well I’m a HUGE stand up fan (can’t you tell by all of my other stand-up comedian book reviews on here). But there is something about a stand-up that is vulnerable even if on the outside they appear strong and put-together. Benson felt to me like a stand-up comedian sort of guy — and numerous times throughout the story I found myself laughing at different things he said or thought.

All-in-all, this book was really entertaining. And that’s what we wan’t out of a good book… to be entertained. I felt like the story was compelling and I definitely will be eagerly awaiting the next novel Trident’s Forge which is set to come out in April of 2016 (at the time of this publishing).

I received a free copy in return for my honest review.

Humankind has escaped a dying Earth and set out to find a new home among the stars aboard an immense generation ship affectionately name the Ark. Bryan Benson is the Ark’s greatest living sports hero, enjoying retirement working as a detective in Avalon, his home module. The hours are good, the work is easy, and the perks can’t be beat.

But when a crew member goes missing, Bryan is thrust into the center of an ever-expanding web of deception, secrets, and violence that overturns everything he knows about living on the Ark and threatens everyone aboard. As the last remnants of humanity hurtle towards their salvation, Bryan finds himself in a desperate race to unravel the conspiracy before a madman turns mankind’s home into its tomb. Patrick S. Tomlinson lives in Milwaukee, Wisconsin with a menagerie of houseplants in varying levels of health, a Mustang, and a Triumph motorcycle bought specifically to embarrass and infuriate Harley riders. When not writing sci-fi and fantasy novels and short stories, Patrick is busy developing his other passion for writing and performing stand-up comedy in the Madison, Milwaukee, and Chicago scenes.