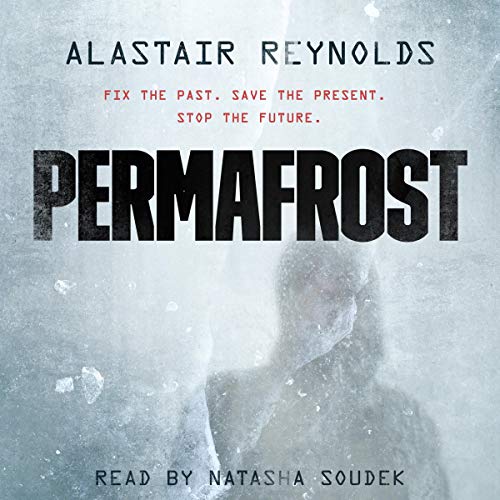 I was really looking forward to this book.  I had hyped it up in my brain early on (I think I even included it in my what to look for in 2019 series in late 2018).  But, when I first picked it up I had just finished another fantastic and well written time travel book (Recursion by Blake Crouch).  I listened to the point that I realized/remembered that this was going to be another time travel book and ended up stopping for a bit, afraid I was going to skew my feelings on Permafrost.

I picked it back up a couple of weeks later and flew through it. At under 5-hours it didn’t take long to finish – but I also wasn’t a big fan of it.  It turns out that I just didn’t enjoy the way this book was written. I liked the premise and I thought that it was an interesting and new take on time travel that I’ve never heard before. But I wasn’t a fan of the execution. I just didn’t personally enjoy Reynolds’ storytelling style.  Maybe that’s just me since I see the reviews on this are all pretty stellar.

I’m unsure what or how I would have changed this book to be better for me, but it just felt like it was missing something.  Early in the story it felt like the characters were one dimensional and just sort of bland.  As the story progressed that feeling increased for me since I didn’t have any compelling reasons to like or dislike anyone.

Natasha Soudek did a fine job narrating this.  The entire story was told from an older (70s) Russian woman – so the accents were well done and didn’t take away from the story.  I thought that Soudek moved the story along quite well.

Fix the past. Save the present. Stop the future. Master of science fiction Alastair Reynolds unfolds a time-traveling climate fiction adventure in Permafrost.

2080: at a remote site on the edge of the Arctic Circle, a group of scientists, engineers, and physicians gather to gamble humanity’s future on one last-ditch experiment. Their goal: to make a tiny alteration to the past, averting a global catastrophe while at the same time leaving recorded history intact. To make the experiment work, they just need one last recruit: an ageing schoolteacher whose late mother was the foremost expert on the mathematics of paradox.

2028: a young woman goes into surgery for routine brain surgery. In the days following her operation, she begins to hear another voice in her head...an unwanted presence which seems to have a will, and a purpose, all of its own - one that will disrupt her life entirely. The only choice left to her is a simple one.

Does she resist...or become a collaborator?