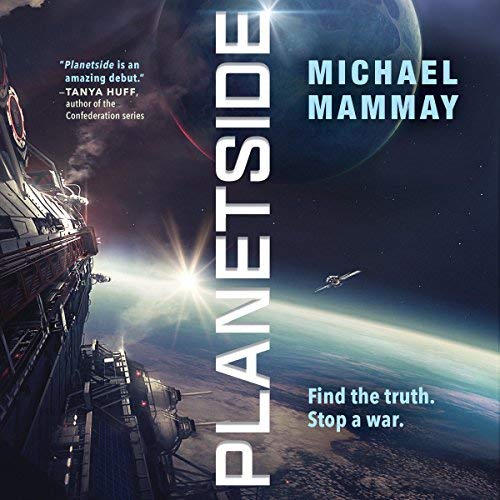 It’s Hard To Believe This Is A Debut Author

So, one of the scariest things as a blogger is writing a review where you finish the entire thing, go to save it and something happens to it.  Whether it be a page navigation, network issue, or a logged in/out issue.  Anything can happen and you’d think I would learn to write reviews in a text editor first.  I lost my entire first version (around 300-400 words or so), so hopefully, this is a good second run-through.

What I can say about Planetside is that Michael Mammay did not feel like a new author in any way.  He took an epic science fiction story that very well could have been 20 hours and cut the stuff that would feel redundant or unneeded.  What you’re left with is Planetside.  A story of a semi-retired war hero who is called out to a base for a seemingly routine investigation.

What you’re left with is a hybrid Science Fiction (specifically a space opera) mixed with a military thriller thrown into a blender with a mystery. The mystery was my favorite part since it seemed to be the overarching thread that held the entire story together. Mammay was able to write a believable story set in the future that I not only wanted to read by I needed to know what happened.

Planetside also has the benefit of being narrated by R.C. Bray who, as always, does a great job in bringing the story to life. He breathes life into the characters and allows each story to be told in a way that I think would make Mammay proud.

I realize that this is one of those stories that is going to be both hard to summarize and review since it would be hard to do without spoiling anything. Just know that you are in for a treat. A story I was shocked to find out wasn’t written by a veteran author. A story that filled me with wonder and also made me feel.

A seasoned military officer uncovers a deadly conspiracy on a distant, war-torn planet…

War heroes aren’t usually called out of semi-retirement and sent to the far reaches of the galaxy for a routine investigation. So when Colonel Carl Butler answers the call from an old and powerful friend, he knows it’s something big – and he’s not being told the whole story. A high councilor’s son has gone MIA out of Cappa Base, the space station orbiting a battle-ravaged planet. The young lieutenant had been wounded and evacuated – but there’s no record of him having ever arrived at hospital command.

The colonel quickly finds Cappa Base to be a labyrinth of dead ends and sabotage: the hospital commander stonewalls him, the Special Ops leader won’t come off the planet, witnesses go missing, radar data disappears, and that’s before he encounters the alien enemy. Butler has no choice but to drop down onto a hostile planet – because someone is using the war zone as a cover. The answers are there – Butler just has to make it back alive…

One thought on “Planetside (Planetside #1) by Michael Mammay (Narrated by R.C. Bray)”