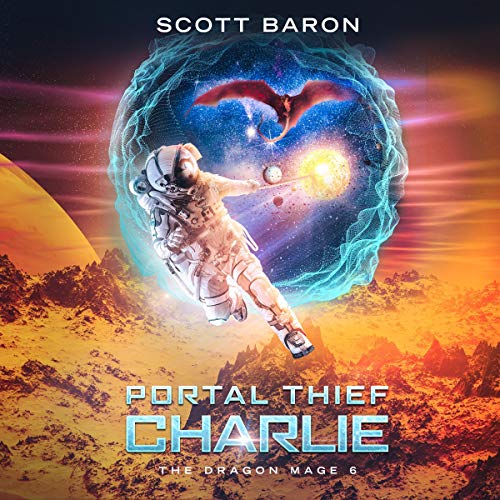 You think going into a book that’s six books into a series that there won’t be any more surprises. But then, you’ve never read the Dragon Mage series. Scott Baron was not only able to surprise me with everything that happened in Portal Thief Charlie, but he also threw in some (slight spoiler) cross-book characters. Even if you’d told me “oh Baron is going to add in someone from another book into this story” I couldn’t have come up with a way to make that work. But, not only did he make it work – it works really well.

Portal Thief Charlie was one of those books that I’m comfortable with but then took me from being comfy in my chair to the edge of it really quick. Baron threw in a bunch of action and certain parts of the book that I didn’t know if the crew was going to make it out from. He added in different storylines for different characters – each one of them interesting and to their strengths and weaknesses.

The mixed-up jumps and the explanation of it (along with trying to get out of the confusion) were also insanely interesting and different for this series. Almost everything I thought I knew went out the window and each character was challenged in a new and interesting way. Charlie is here, but his role isn’t at the forefront in this story – letting some of the other characters use their strengths to move the story along. That’s not to say that this isn’t a Charlie book – it sure is, it was just Charlie and his crew instead of just Charlie or Charlie and the “dragon”.

Overall, the combination of Baron and Bennett strikes again. This one was perfect and absolutely flew by. I think it took me less than two days to start and finish this one. I couldn’t put it down.

I think there are nine books total, and I’m trying to figure out exactly how this story is going to end, but I can’t figure the full arc out yet. Hopefully, books 7 and 8 have some more hints for me. But knowing Baron – I’ll be guessing until the bitter end.

Charlie had a constant companion everywhere he went. Unfortunately, its name was trouble.

Space portals to another galaxy were just the beginning of the worries piled high on Charlie’s plate. Not only was he facing a hostile band of alien mercenaries, hell-bent on capturing his home and enslaving his people, but now, it seemed, there was something more afoot.

With his homeworld, solar system, and even the entire galaxy at risk, Charlie and the great AI minds of Earth had to make a decision. Would they wait for the alien aggressors to make their next move, or would they step up and take the fight to them? Whatever the decision, Charlie knew he and his friends would be in for the fight of their lives. And against an enemy more powerful than any they’d ever imagined.

Bud by the Grace of God by S.E. Sasaki (