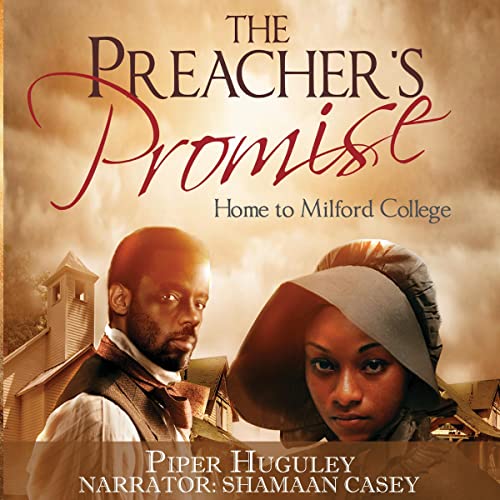 Not normally my cup of tea – I still enjoy a good romance and a good historical book. Historical Romance isn’t always something I reach for – but having already genuinely enjoyed another book from the combination of Huguley and Shamaan Casey (The Lawyers Luck) – I knew I had to check this one out. I realize before starting it was that this is the second book I’ve read in this series – the first one being the novella listed above.

I went into this one with an open mind and really enjoyed it. I admittedly don’t know much about this era of history and I feel like every novel I read, even though they’re fiction, I’m learning things. This one was no different. The different complexities and situations that they were finding and thrown into each tugged at my heartstrings and taught me how people were seen and treated.

The power of this story lies with Huguley’s ability to combine great characters with unbelievably well-thought-out situations. The Preacher’s Promise was one of those books that I kept basically being shocked by. It wasn’t a mystery or a thriller where I was expecting it, but her writing style and the way things were playing out – I just kept thinking “whoa” or “I didn’t see that coming”.

Add in the layers that Huguley builds throughout and The Preacher’s Promise was one of those books that just stays with me after finishing it. The story felt timeless even though it was very specifically set in a time period. The people could have been plucked out of that time and put anywhere else and I’d still want to read about them. But the situations, places, and other things made this even better.

As with all of his other performances, Shamaan Casey does a great job with this one. His voice lends itself not only to this time period but to some of the heavier hitting parts of the book. And he’s able to soften it up a bit for some of the more calm and romantic moments as well. An excellent performance by an excellent narrator.

Devastated by her father’s death days after her triumphant graduation from Oberlin College, Amanda Stewart is all alone in the world. Her father’s unscrupulous business partner offers her an indecent proposal to earn a living. Instead, to fulfill a promise she made to her father, she resolves to start a school to educate and uplift their race. Sorting through her father’s papers, she discovers he had carried on a mysterious correspondence with a plantation in Milford, Georgia. She determines to start her teaching work with the formerly enslaved. However, when she arrives, the mayor tells her to leave. There’s nowhere for her to go.

Virgil Smithson, Milford’s mayor, blacksmith, and sometimes preacher man with a gift for fiery oratory, doesn’t want anything to do with a snobby schoolteacher from up North. On top of everything else, the schoolteacher lady has a will hard enough to match the iron he forges. He must organize his fellow formerly enslaved citizens into a new town and raise his young daughter alone. Still, his troubled past haunts him. He cannot forget the promise he made to his daughter’s mother as she died – that their child would learn to read and write. If only he didn’t have secrets that the new schoolteacher seems determined to uncover.

To keep The Preacher’s Promise, Amanda and Virgil must put aside their enmity, unite for the sake of a newly-created community in a troubling age, and do things they never imagined. In the aftermath of the flood that was the Civil War, God set his bow upon the earth to show love and understanding for humankind. To reflect God’s promise, these combatants must put aside their differences and come together – somehow.

The Lawyer’s Luck by Piper Huguley