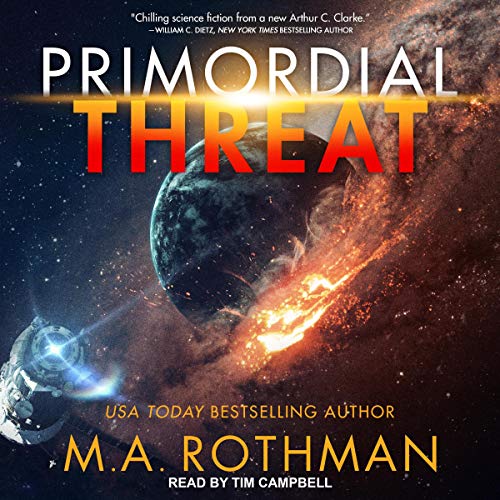 I’ve been sitting on this book for a bit.  I honestly do not know why – I was excited about it when I first saw the synopsis – it probably just got lost in the shuffle.  Rothman was pretty unknown to me – but everything I saw about him and this book had me going into it with high hopes.

I didn’t read any reviews before picking this up (or after finishing it) – so I’m unsure how it was received – but overall – I liked it.  It was an interesting and different story.  Sure, there are parts that felt like “well that could never happen” but it is a science fiction story – so who knows what we could come up with in the future.

I thought that Rothman did a good job of writing characters that were believable and likable. They were easy to root for and honestly, I didn’t know how this story was going to end.  I was listening to the final chapters on a rainy drive home and I had to pull over to let the book finish because I was getting too into it!

The pacing was pretty good but could have used a kick-starter every once in a while.  It wasn’t perfect by any means – but I’ve also read books that I’ve said aloud “come on, get to the point!” This was sort of in the middle.  At times I thought “why is this in here” but then later it was shown to be an important part.

I need to take a second here to applaud Tim Campbell’s narration.  He did an absolutely stellar job with this book and I will be looking for more books from him soon.  He was able to give each character their own voice without over-acting or dramatizing the performance.

Overall, I enjoyed this science fiction story.  It had a sort of Hollywood apocalyptic/sci-fi vibe to it.  You know the one where Dwayne Johnson would be a main character in it. And there’s nothing wrong with a fun-filled action book like that.

The year is 2066, and the world is oblivious to the threat it faces.

The fate of humanity lies on the shoulders of Burt Radcliffe, the new head of NASA's Near Earth Object program. He's been rushing the completion of DefenseNet, a ring of satellites that are both part of an early-warning system, as well as the means to eliminate incoming threats.

Yet Burt knows that despite the world's best efforts, nothing can be done about the alert he's just received. Coming out of deep space is a danger that's been approaching since the dawn of time. A black hole. An unstoppable threat that promises death for all in its wake.

Dave Holmes was a modern-day Einstein. As the original architect of DefenseNet, he'd had visions of this Primordial Threat before he disappeared, yet he'd left behind no details on how the problem might be solved. Can Holmes be found, and if so, will his solution even work?

The world has less than a year to find out.

The Door Through Space by Marion Zimmer