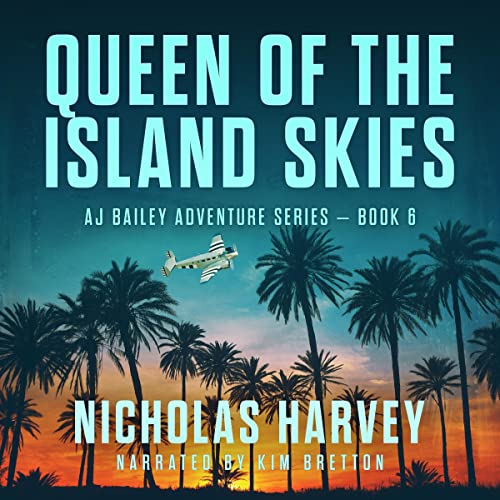 I’ve enjoyed the AJ Bailey books I’ve read through so far. Harvey’s way of writing them draws me in and keeps me intrigued. Queen of the Island Skies was no different.

It opens with a plane crash in 1958 and tells the story of the wreckage and the survivor. But also about what that survivor left on the plane. Then we jump to present times (well, early 2020, a few months into the Covid Pandemic). I wasn’t sure how the plane crash would be tied into AJ, but I shouldn’t have doubted Harvey because he pulled it off. He also throws in some shady characters that feel like they’re associated with a cartel, and I didn’t expect that angle.

Queen of the Island skies jumps back and forth from 1958 to 2020 seamlessly, and it works really well in the audiobook as well (sometimes jumping back and forth can get confusing, but Harvey made sure to mention when each scene was taking place). The connections between then and now were fascinating, and the emotion that Harvey could add to this one gave it the upper hand against other similar books.

Overall, I thought Queen of the Island skies might be the best book I’ve read from this series. I haven’t read them all, and I’m reminded of how few I’ve actually read every time I finish one. I love them; they give me a feeling of SCUBA diving while I sit in my chilled house on the East Coast.

Kim Bretton got to stretch her accent skills a little in this one, and I thought she did a great job. It added to the story without making it hard to follow. It gave these new (or returning) characters life and helped differentiate them without being distracting (which is hard to pull off). Kudos to Bretton for another excellent performance.

Some days, the sharks are the friendliest beasts in the water….

AJ jumps at the chance of an intriguing off-shore dive trip, but when the Mexican cartel takes an interest in the sunken plane she’s searching for, the adventure soon turns deadly.

The story begins during the “Golden Age” of flying and quickly moves into current time where AJ and her friends, Reg and Thomas, use clues from 1958 to hunt down a wreck. They thought the technical dives were challenging, but the dangers in the ocean are nothing compared to the ruthless men that come speeding across the waters.

Secrets, treachery, and dangerous dives to the depths of the Caribbean Sea will keep you on the edge-of-your-seat in book six of this fast-paced suspense series.

Each book can be enjoyed in series order, or as stand-alone novels.