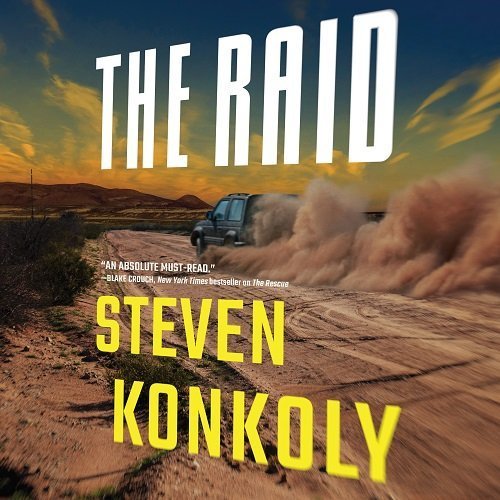 You’re In For Another Crazy Ride

I really enjoyed the first book in this series (The Rescue), I thought it was an incredibly well told thriller.  The Raid was no different.  It was a fast-paced thriller that took what the first book introduced and ran with it.  Of course, Ryan Decker is back and he’s still on a mission.  He’s trying to get to the bottom of what he wasn’t able to completely finish off in the first book.

If you’re unfamiliar with Konkoly’s storytelling – just know you’re in for a ride.  He’s a non-stop storyteller that sprinkles in details about Decker while he’s jumping out of planes or in a firefight in the Mexican desert. He gives you just enough to like the character then throws them out of a plane to see if their chute works.  It’s a fantastic way to tell a story and something I admire.  The entire way down we learn who a character is without wasting a breath.

The Raid was so enjoyable because it felt real.  I would say other than the shootouts in crowded areas but I’m sure a Google search or two of Mexican cartels and bloodbaths would turn up results. The specifics (that I won’t spoil) that Konkoly gets into as to why and how the main piece of this story where happening felt very realistic.

The technology used (especially early on in their first investigation) was crazy.  I like that it even surprised Decker a bit. His description of where he knew the tech was and saying that this was numerous generations ahead of the stuff that was being dreamed up was a great way to explain it without going too deep into it.

Overall, I’m a thriller fan and a Konkoly fan – so The Raid was a win-win for me.  A blast of a book that I absolutely flew through.

After exposing and dismantling a deep-state conspiracy that nearly destroyed his life, Ryan Decker finds his covert skills have put him on the radar of influential Senator Steele. Now Steele needs his help. Two patrol agents were killed in a bizarre explosion near the US-Mexico border – and the evidence doesn’t line up with the official story.

Enlisted by Steele to run an undercover, off-the-books investigation, Decker and his partner, Harlow, head to the border town of Tecate. But when they’re caught in an ambush, Decker realizes they’ve stumbled onto something far more dangerous than any of them understood.

The cover-up is rooted deep in the Department of Defense itself. Fearful for their own lives and unable to trust anyone outside their small circle of skilled associates, Decker and Harlow set in motion a risky plan to stop a criminal conspiracy.