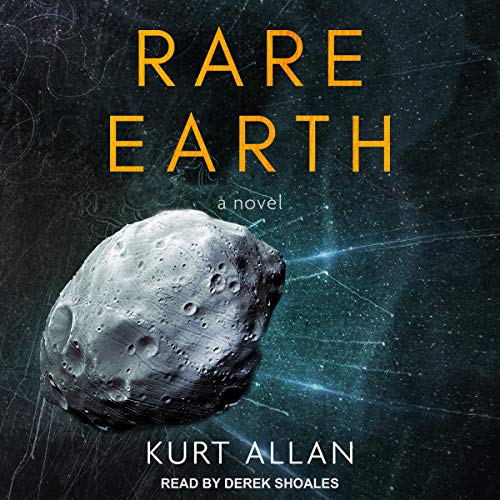 I went into this book with no expectations which I’m kind of glad I did. I hadn’t picked it up for a while after grabbing it so I’d even forgotten what the premise of it was. Digging into it (pun intended) was a pleasure and it ended up being a complete surprise of a book. I’ve read a few other stories similar to this but none of them had the same grittiness that this one had. At first I was like, oh this is going to be like Armageddon. Nope. Then I thought it was going to be just another mystery but set in space. Not even close.

Kurt Allan does a great job writing a story that continues to build and kept me guessing throughout.  A few times I was pretty sure that I had the story figured out but I wasn’t even close. I had a really good feeling for about the last third of the book, but that feeling was wrong (I apparently suck at guessing the endings of books). But, the ending surprised me and I’m glad that it did.

I actually originally noticed this book because of its narrator. I’ve listened to Derek Shoales before reading a long-running series and I was excited to see him outside of that. I also interviewed him on a podcast that I used to do, so I wanted to see what his work sounded like outside of that series.

Overall, I really enjoyed Rare Earth, it had a lot more heart than I was expecting and as I’ve mentioned already, kept me guessing throughout.

A lost mining crew, 400 million miles from Earth. A retired miner journeys to find out why.

“There’s something out there….”

Waldo Packwood has had a rough time of things lately. He’s lost his job, his friends, and finally his family. At 50 years old, he’s living alone in a small apartment wondering what’s happened to his life. He’s unexpectedly asked to travel to Hector 1, a lone asteroid in the Jupiter Trojans, to investigate the missing crew.

“That’s just it, Waldo”, sighed the director, “we don’t know what happened.”

His trip is a struggle from the beginning, as he discovers more about those around him and what they’re willing to do to keep Hector 1 to themselves. Instead of answers, he’s cast into the fight of his life as he struggles to uncover the secrets and lies that have been built around this distant world.

Rare Earth is a gritty science-fiction thriller and debut novel about an unconventional hero and second chances.

“It’s going to be that kind of story, so buckle up.”

Audiobook: War of the Worlds Retaliation