The Rationing by Charles Wheelan (Narrated by Josh Hurley) 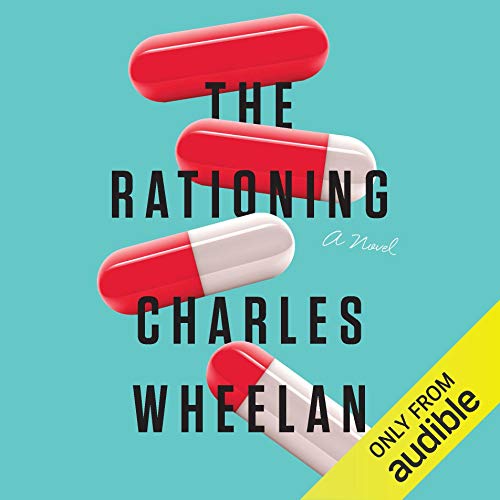 For A While I Thought It Wasn’t Fiction

I started listening to The Rationing on a whim, having only briefly skimmed the synopsis, expecting a solid piece of fiction. Within minutes, I was rereading the synopsis and googling a bit, trying to determine if this story was really a memoir of sorts, or perhaps a piece of fiction based loosely on true events.

The books point of view, as a journalist and government scientist looking back on a recently resolved crisis, was refreshing and so well done I truly wasn’t convinced I was listening to a work of fiction. It read a lot like Richard Preston’s non-fiction stories (Hot Zone, Demon In The Freezer). As I continued listening, what emerged was an interesting piece of political satire with realistic and completely believable sci-fi influences.

Set in the not too distant future, where a drug called Dormigen solved nearly all of our problems, we seem to have grown somewhat complacent, knowing it would always be there when we needed it most. When the greed driven decision of a pharmaceutical company unwittingly challenges that assumption, putting millions of lives at risk, an epidemic looms just over the horizon. We’re granted front row seats as the story progresses and our government struggles to contain the potentially devastating spread of a deadly pathogen no one seems to understand.

The Rationing allows us to explore the role of power dynamics in decision making, policy making, crisis management, and diplomacy, with often first hand observations made from within the walls of the White House during this on-going crisis. The Rationing highlights the intricacies of mitigating a public health crisis of epic proportions in an increasingly globalized world and asks ethical questions that seem to have no right answer: Who gets what’s left of the drug? Who doesn’t? Are some lives more important than others? What makes someone a “good” person, “worthy” of what remains? Can anything disqualify someone from receiving a dose? If so, where do we draw the line? What kinds of things are we willing to sacrifice as individuals, as a nation, for the greater good?

I gave the story 4 out of 5 stars only because I wished the story further explored what was going on outside of the White House and other government office buildings while the crisis unfolded. While we’re given a few brief glimpses, it would have been interesting to see a bit more of how medical professionals, members of the media, and ordinary citizens were responding.The narrator was perfect for this story, lending our main character just the right voice, portraying just the right amount of emotion, and building just the right level of suspense to fit his reflective point of view and demonstrate the character’s attempt to remain objective, despite his first-person perspective.

Overall, an enjoyable, if not terrifying piece of fiction.

America is in trouble - at the mercy of a puzzling pathogen. That ordinarily wouldn’t lead to catastrophe, thanks to modern medicine, but there’s just one problem: the government supply of Dormigen, the silver bullet of pharmaceuticals, has been depleted just as demand begins to spike.

Set in the near future, The Rationing centers around a White House struggling to quell the crisis - and control the narrative. Working together, just barely, are a savvy but preoccupied president; a Speaker more interested in jockeying for position - and a potential presidential bid - than attending to the minutiae of disease control; a patriotic majority leader unable to differentiate a virus from a bacterium; a strategist with brilliant analytical abilities but abominable people skills; and, improbably, our narrator, a low-level scientist with the National Institutes of Health who happens to be the world’s leading expert in lurking viruses.

Little goes according to plan during the three weeks necessary to replenish the stocks of Dormigen. Some Americans will get the life-saving drug and others will not, and nations with their own supply soon offer aid - but for a price. China senses blood and a geopolitical victory, presenting a laundry list of demands that ranges from complete domination of the South China Sea to additional parking spaces at the UN, while India claims it can save the day for the US.