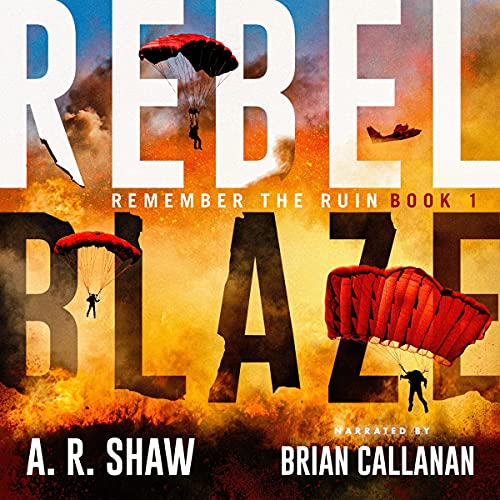 I Blazed Through This One

I wasn’t sure what to think of this when I first dove into it. This isn’t my first A.R. Shaw book, and I remembered really enjoying the other series. I knew going into it that it was going to be good, but I didn’t expect the direction that the story ended up taking. In the opening chapters as things start to fall into chaos, I was a bit worried that things were going to get a bit too political for me (I know that PA books can be and are usually political in nature). I just worried that it was going to be blamed on certain things or people, but Shaw did a good job of skirting right up to the edge without throwing any specific political party under the bus.

Now, that being said, this isn’t your typical apocalyptic book, this is more of a revenge story than about surviving the apocalypse. Also, I loved the idea of smoke jumpers being the main characters since they are a special kind of crazy jumping into forest fires like that. Dane as a character was a bit edgy for me, but on purpose. A few times I thought “man, why is she like this?” But, as I read on I quickly realized why she was and what made her that way. The scenes where she ends up helping someone in need who’s in a BAD situation (trying to be spoiler-free) was intense and definitely vividly described. I thought that was a turning point for her character and I realized that was going to set the tone for the final half of the book.

Shaw did something else that I enjoy when it’s done right, she bounced around between characters and showed different perspectives, sometimes of the same scenes, from different people in the book. Early in the book it feels a bit disjointed and confusing, but as the story progresses they start to meld together and things and people that seemed to be completely unrelated were coming together.  I also thought that Shaw did a great job writing in a few despicable characters that you just had to hate.

Throw in the excellent narration from Brian Callanan and you have an interesting story that I definitely want to read more of. I thought that Rebel Blaze was one of the more unique apocalyptic or revenge stories I’ve read in quite some time. I love what Shaw can do with characters and I thought that she wrote some crazy but great characters in this one.

“As that old campfire song says.”

There’ll Be a Hot Time in the Old Town Tonight

Is it wrong to kill a killer?

Dane Talbot uses a world of civil unrest to her advantage, and avenges all those who’ve done her wrong.

In the near dystopian future, a quiet firefighter, Dane Talbot, achieves the coveted position of smokejumper, only to soon realize the nation is filled with domestic terrorism and worsening by the day. She sees an opportunity at last to right the wrongs of her past and seeks revenge. But the lawless world of vigilante justice works both ways. Will Dane achieve her goal or will she regret she ever tried.

Get your copy today!