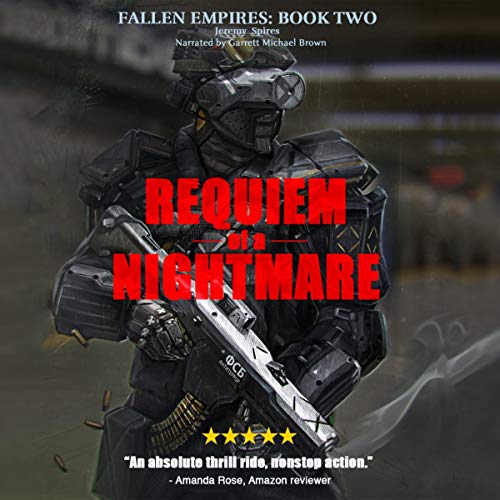 I dove into this with pretty much no expectations and sometimes that can really make or break a book.  I did not read book one but I thought that Spires did a good job giving some of the backing detail without overdoing it.  I was able to understand just enough that this book made sense to me.

Having not read the first book, I wasn’t familiar with any of the characters and once again Spires did just enough to keep me intrigued by them.  I loved that I felt like I was finding out more about them even in the last parts of the book.  It’s always interesting to me to still have new personality traits come out in the final stretch of the book.

Requiem of a Nightmare touched on some subjects that, because they were alien races and not humans, would have been a bit too political if it had been only humans.  I enjoyed that Spires was able to weave in some of the “typical” things we think and feel today into this Sci-Fi story.  There was a line about females near the end (I won’t mention why it was brought up because it was a total surprise to me) but it talked about how the woman were basically homebodies and took care of all the duties of the house (similar to 20 years ago in the US).

The story itself was fun and fast-paced.  I really enjoyed the character building and the new races that were introduced.  Add in the great narration by Brown (giving different voices to the different characters) I thought that this was a fantastic audiobook.  Brown did a good job giving the main antagonists (the bird-like creatures) a voice that was grating (as described) but not grating enough to annoy me while listening.  The same can be said about the sing-songy voices we meet later.  He did just enough with it to make it additive to the story without ending up annoying me because it was too much.  An overall fantastic job for, what appears to be Brown’s second narration.

Overall, a fun sci-fi thriller that had me on the edge of my seat at times.  A book that I enjoyed without knowing really anything about the backstory or the author.

The human civil war has ended.

Vandorian and Phelb have united under one flag once more, and peace now rules the human empire. But ancient enemies still exist in the galaxy, and they are unhappy about the new peace. Buoyed by victories against the Gilbaglians, humans boldly assault their new foes while seeking out more knowledge about the mysterious Cetoplin race that appears to have inadvertently created humanity.

But darkness is spreading, even as the light of human compassion spreads, the darkness of wars past threatens to engulf the galaxy once more.