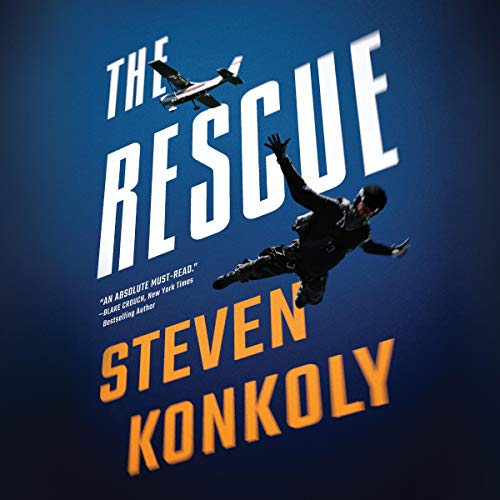 I have a lot of Steven Konkoly titles in my TBR pile.  I’m almost embarrassed to admit that I have more on my TBR than my actual read pile.  But I kept hearing about this book. Numerous of the other authors that I follow were talking about how good this book was. I’m glad that I fell into peer pressure.  The Rescue is the real deal. Konkoly is a fantastic Thriller author and The Rescue did not disappoint at all.

Sometimes I feel like I’m spoiled with books.  When I get a couple back-to-back 5-star titles I start to feel this way – but The Rescue was the real deal.  I enjoyed it from beginning to end and I was completely invested in each character (especially Decker).

The Rescue introduces a slew of new things considering its book one in a new series.  We’re introduced to Ryan Decker who reminded me a little bit of Tom Clancy’s Jack Ryan mixed with some Jason Bourne along with a few others sprinkled in there for good measure.  We’re introduced to him only to find out that he’s been arrested and put away (and not told why until later in the book).  The rest of the story is him trying, not only to exonerate himself but also trying to put the real bad guys behind bars (or in the ground) for killing his friends and family.

Pretty much everyone else we meet is essential to the story but are also spoilers if I speak too much about them here.  But know that there will be a kinda-sorta-beat-around-the-bush love interest and also a complete bad-A female who helps Decker out of some jams.  You also have some old friends and some people “back from the dead”.

I loved The Rescue and I had an absolute blast reading it.  It’s one of the best thrillers I’ve read in 2019 and I cannot wait to see what else Konkoly has in store for us and Decker. For fans of Tom Clancy and Lee Child, a heart-pumping thriller of betrayal, revenge, and conspiracy by USA Today bestselling author Steven Konkoly.

Former CIA operative turned mercenary for hire Ryan Decker’s specialty is rescuing kidnap victims. Hired by an influential US senator to liberate his daughter from a human-trafficking ring, Decker never anticipated sabotage or that the assault could go so disastrously wrong. The hostage is dead. His team is wiped out, and so are their families, including Decker’s own wife and son – eliminated one by one by the Russian mafia. And he’s survived to take the fall.

When he’s inexplicably freed soon into a ten-year sentence in federal prison, Decker suspects another setup. And private investigator Harlow Mackenzie knows he’s right. She has evidence that a power greater than the Russian mob was behind the raid that ruined Decker’s life.

The next move in a nationwide cat-and-mouse game of high-level sedition is up to them. Fueled by revenge and an obsession to clear his name, Decker has only one mission: to destroy a growing conspiracy before it’s too late.