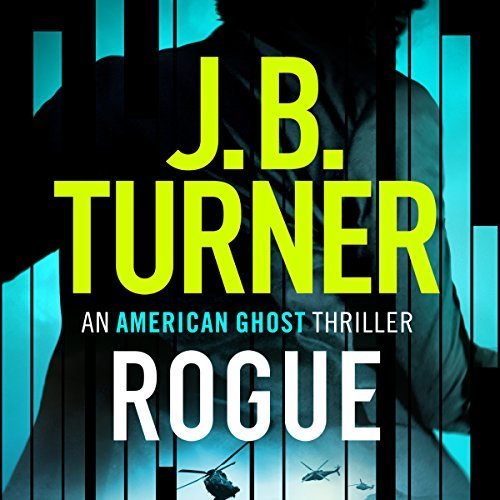 I needed a thriller break from all of the post-apocalyptic books I’ve been reading and Rogue was the perfect book for that.  Not too long and full of action.  I had a blast with this book from beginning to end.

J.B. Turner is a master storyteller and was able to tell a tight story that was almost perfect from beginning to end.  I was hooked from the opening and couldn’t stop until I was finished.  I ended up finishing this in less than 2 days.

The even more intriguing part of this is that it appears to be the start of a new series. I can’t tell completely (other than the fact that it’s listed as “An American Ghost Thriller” on Audible and cover).  I need some action-first thrillers in my life and I hope that Turner and Kafer (god willing) will be able to provide them!

I liked the “deep state” stuff in this, but I would bet that it’s not for everyone.  Along with some of the people who felt a little bit like a caricature. But, even with that being said, I thought that Turner was able to do a good job of introducing people without making them feel robotic or too unrealistic.

Nathan Stone is a total BA. But is sort of an anti-hero for most of the book.  There are some scenes and some backstory that explains to you who Stone is and then scenes in the book that shows that he is pretty messed up as a person.  A few times I thought, oh no, I’m not going to like him and he’s the main character! But I think it was all done as a build up and a character bridge to get us to understand both who he is and what he’s made of.

There were a few scenes that I could not believe he made it out from and I found myself trying to listen longer to figure out how he was going to continue.  Sure, some of it was a little far-fetched – but that’s what makes a fun thriller, fun. He wasn’t anything new when it comes to a thriller star – but he was fun to read.  There were some scenes and even some plot points that definitely borrowed from the Bourne series a bit, but that’s one of my all-time favorites – so have at it!  I hope that there are a few of them for me to enjoy (and I hope that they stay a little shorter than the average book too, it’s nice to slot them in mid-week and finish them quickly).

Overall, Rogue was an outstanding thriller packed into a small package.  I cannot wait to see where Stone turns up next.

A deep-state US organization has a top-secret kill list - and a popular senator is on it.

Nathan Stone was killed in action while serving as a covert CIA operative. Or so everyone thought. In reality he’s become a ghost, a black-ops asset with a new identity and controlled by a secret government organization. The Commission has one aim: to hunt down and assassinate anti-establishment enemies of the state.

Its number-one target is Senator Brad Crichton, an ambitious politician with growing support. Stone is ready to take him out, but his plan is soon compromised when the Commission’s kill list is leaked to a journalist - whose own name is on the list too. And when the journalist tries to alert the senator, he is found dead in suspicious circumstances. Stone is closing in on Crichton, but must act swiftly to reach him before the truth does.

He knows that one wrong foot will put him in the firing line. But where national security is at stake, the hunter can quickly become the hunted.