Romancing the Kicker by Catherine Lane (Narrated by Abby Craden) 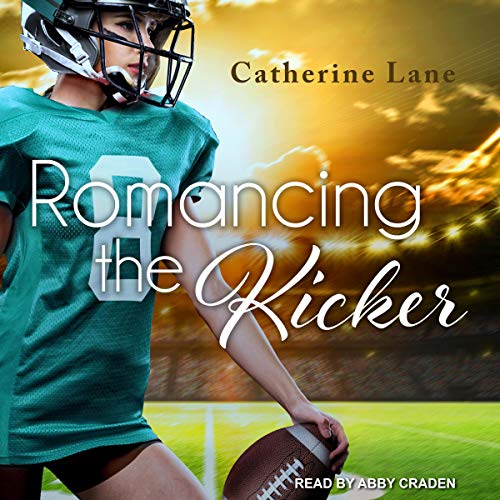 I’ve been looking forward to this one since I saw that Tantor was going to be releasing it on audio. I’ve never read anything by Catherine Lane before, but after this book I’ll definitely be on the lookout for more stories by her. Romancing The Kicker is one of those stories that is so much more than just a sports romance. I’m noticing a trend with these and I’m loving it. Just like the last sports romance I read (Always More) this story talks a lot about the struggles that women face in the world of sports. This time Parker is taking on football.

But, just trying to become the first female to play at the professional level – Parker is dealing with so much more. She’s dealing with her father and his lack of approval in her. She’s dealing with a life that’s been bouncing around from thing to thing and person to person. She has a lot of growing to do, and meeting Carly seems to be the spark that she needed to make that change.

Carly’s story is also just as interesting but from the other aspect. She’s the only female athletic trainer on the team. She’s constantly dealing with sexual harasment and the idea that she shouldn’t be there. She doesn’t come from money like Parker does and fights for everything she has. Very similar to the storyline in Always More – she has to deal with a deadbeat parent that only seems to show up thinking that she has money now. (I will say that the scenes dealing with this, once everything is settled were perfectly written).

Overall, a slow burn sports romance, that, like I said, was so much more. Parker and Carly’s story was cute, made me laugh, and even had me in tears at points. Catherine Lane is a name I will be on the lookout for from now on.

Parker Sherbourne has a talent for sports and seduction – and the body to prove it. When the High Rollers, the professional football team from Las Vegas, chase after her to be their point-after specialist, she jumps at the chance. Sure, the position is only a publicity stunt, but she has always been able to turn any situation to her advantage.

Carly Bartlett joins the Rollers as the newest athletic trainer and the only other female on the payroll. This dream job could bring the financial security her family desperately needs. The head trainer has only one warning: don’t get involved with a player. Not a problem. She doesn’t go for guys.

When Parker reaches out to Carly for treatment, sparks fly. Will Carly fall for Parker’s charms and put her own desires ahead of her family’s? Has Parker finally found the woman who’ll make her slow down and stop playing the angles?

With the macho world of football against them, can they beat the odds in this lesbian sports romance?

A Roll in the Hay by Lola Keeley (Narrat