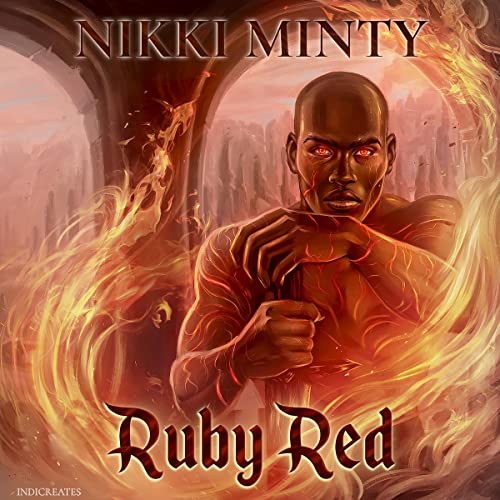 One of the cool things about being an avid listener is being able to start and finish books quickly. Another is doing so with a full series as well. While I still have one book (at least one produced book) – I read Pastel Pink less than a week ago and I was able to get through the second book in quick succession – really allowing me to dive deep into the series.

The unfortunate part is everything I said in the first review is still true in this book. The social commentary is there and will be there in all of the books – just a guess due to the names of the books and the entire caste/race system in place. The other thing that’s still there and clear and present for the audiobook listener is the just phenomenal narration by the cast. They absolutely nail this one and I’m sure the third book will be the same.

In Ruby Red, we’re treated to more of the same from Pastel Pink – but I don’t say that with a negative connotation. I mean that completely complimentary. It’s a direct continuation of the first book and it just picks right up and goes with it. (I will warn that if you haven’t read the first book, I’d recommend going back to that one first). But the character building along with the excellent world-building is on full display throughout Ruby Red and really makes this stand out.

What I have the hardest time believing is just how good this series is. I don’t want to spoil anything but wow, it just flies off of the page and into my head. I can almost vividly imagine almost every situation and circumstance that each character is thrown into and it’s just written by an absolute pro in Nikki Minty.

Overall, you can tell I enjoyed this one. The great character and world-building, excellent action, and overall incredibly well-produced audiobook have this as such a good book and a great series.

Alex has called it quits and stormed off, leaving Harlow alone and vulnerable in the danger zone with little chance of survival and a broken heart.

Luckily, Jax finds her and brings her back to the caves. However, little does she know she’s returning with multiple souvenirs.

Standing out for all the wrong reasons has become Harlow’s specialty, and as the effects of her vertic switz tattoo set in and new issues are brought to light, she and her friends will find themselves in the line of fire with Rae and Electra.

Despite Jax’s attempts to neutralise the colour system, the Winter caves have become a death trap for Harlow, and Summer’s castle is no place for a Zeek. Harlow’s only sanctuary might be Spring’s Drake village, but her former ties to a Vallon are sure to cause friction with some of the residents.

Powerful Purples (The Zadok Series #3) b