The Salvage Crew by Yudhanjaya Wijeratne (Narrated by Nathan Fillion) 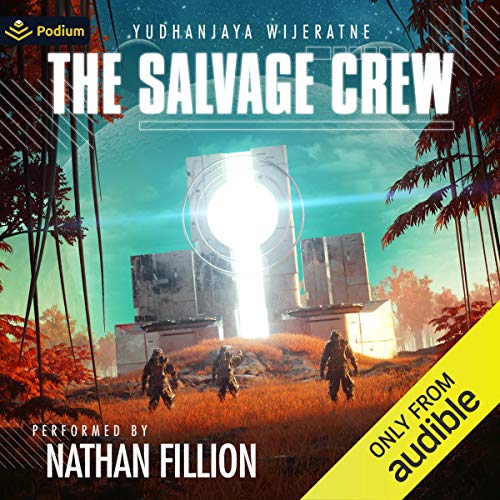 Did Not See This Coming

Another book that I was drawn to just by the cover art. I saw this and knew I had to read it. I went into it completely blind and even now writing my review I haven’t read what the synopsis says.

I haven’t read most of the books that were mentioned that this was like, other than The Martian, but I can see the references and similarities to them all. The Salvage Crew was a super interesting story that had me absolutely intrigued throughout. I absolutely flew though it just trying to figure out what was going to happen. Wijeratne had me on the edge of my seat throughout and I felt like I couldn’t sit back and enjoy it because I didn’t know what was coming next.

I honestly thought I had the story figured out, I had a guess and I thought it was a darn good one. I wasn’t even close. Wijeratne pulled the wool over my eyes and kept me completely blind to the actual ending of this. I love that and I love that even after hundreds of books over the years I still can’t figure some books out. It’s amazing to me.

I’m always a bit cautious when I see that a big-name actor narrates a book. I am because they aren’t audiobook narrators, they’re actors. Sometimes they can transition over and sometimes they can’t. Fillion is on the fence for me. His speech pattern works for dramatic sentences but not as much for ones that weren’t and sometimes there were dramatic pauses in sections that didn’t need them or for too long. But overall, I thought he did a good job with this. He’ll likely bring a lot of people into a book they might not have picked up just because he narrated it.

Award-winning actor Nathan Fillion (Firefly, Castle, The Rookie) brings to life a snarky artificial intelligence you won’t soon forget. Don’t miss his hilarious performance in a story perfectly crafted for sci-fi fans of The Martian, Red Dwarf, and We Are Legion (We Are Bob).

An AI overseer and a human crew arrive on a distant planet to salvage an ancient UN starship. The overseer is unhappy. The crew, well, they’re certainly no A-team. Not even a C-team on the best of days. And worse? Urmahon Beta, the planet, is at the ass-end of nowhere. Everybody expects this to be a long, ugly, and thankless job.

Then it all goes disastrously wrong. What they thought was an uninhabited backwater turns out to be anything but empty. Megafauna roam the land, a rival crew with some terrifyingly high-powered gear haunts the dig site, and a secret that will change humanity forever is waiting in the darkness.

Stuck on this unmapped, hostile planet, lacking resources, and with tech built by the cheapest bidder, the salvage crew must engineer their way to payday…and beat Urmahon Beta before it kills them all.