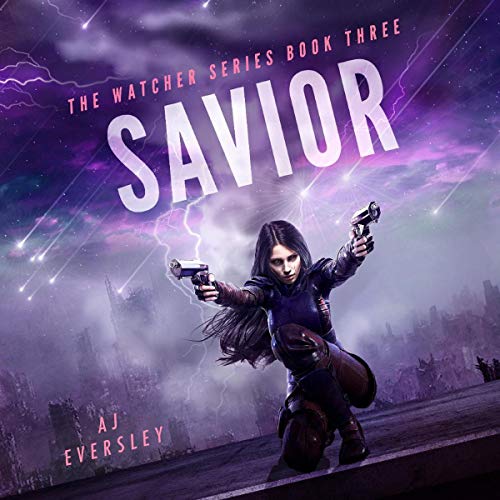 Savior Was A Fitting End to This Trilogy

Savior is the final book in the Watcher Series. And a fitting ending.

It’s So Nice to Have a Real Ending to a Trilogy… I’m being a bit dramatic since I read books that are much longer series than three and I never complain (I usually ask for more).  But when it comes to YA Dystopian books – it’s nice to have the three book series.  There’s a definitive beginning, middle, and end.  The series allows you to button up everything without wanting or needing more. Eversley knocks that out of the park.  I wasn’t sure everything was going to be tied up in the end but the last 30-45 mins really cleared a lot of stuff up.

Savior is sort of the “epic final battle” combined with the typical love triangle.  You get the satisfaction of both of them coming to an end but you have to read Savior to figure it out (no spoilers here).

I know that this series was written for YA’s and that the typical age of the characters is 18/19 but there were still a few parts that I would think “really?” Not that it took away from the story, just a few things/times that someone would say something and I would think “nah, you wouldn’t know that already in life”.  But, then I stopped to genuinely think about it (and again before writing this) and I remember back to that age where I thought I knew everything and no one could tell me differently.

I think that this rings true in this book (and series).  The characters make mistakes that an adult wouldn’t. They act on impulse and utilize their full emotions when thinking about things.  That’s something that normal non-YA books are missing. They’re missing that hope and that life lived without being majorly hurt yet.

Overall, I really enjoyed Savior.  I knocked it a half point for some small and minor things but the series overall was enjoyable even though the series wasn’t really for me.  Every time someone asks what they should pick up if they are a YA fan – I’m going to recommend this series especially because of how satisfying the last part of this book really was.

Also, Chelsea Stephens needs to get more work.  She did a fantastic job narrating this series.  She made the characters believable and really brought her A-game to The Watcher Series.  Steve Campbell, while not in the final book all that much, also has a really enjoyable YA voice that made listening to this series a breeze.

“Even I cannot outrun death. It chases me into darkness and can’t find the light. But he is coming back, and we will need every weapon we can find. And if that means turning to the one person who has caused me so much pain, just to save them all, I will do it…and it just might break me in the process.”

With the inevitable return of Coleman looming, Sawyer knows their army is not enough. On a journey to convince an ally to join their war, Sawyer discovers why the stars have placed the fate of the human race in her hands, but can she accept her destiny even if it means working with the man who tried to kill her?

Kenzie is her enemy. He’s tried to kill Sawyer more than once, and the control Coleman has over him will not fade. Yet, she can’t stay away from him. Both drawn to each other in a way neither can explain, they must learn to trust one another as well as themselves if they want to survive. And soon, Sawyer will find that she doesn’t just fight for humanity’s survival but her own as well. If she wants to live, she must first face the darkness.

One choice saved them from enslavement. One bond created a weapon to fight back. Now, one destiny will reach the stars.

The epic conclusion of the Watcher series will decide the fate of the entire human race.