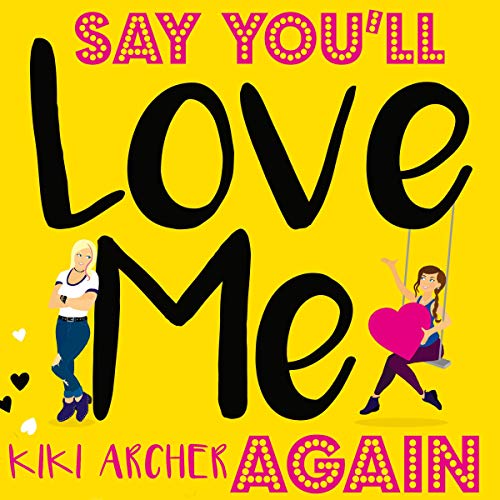 Different Than Your Average Love Story

I’m not really sure how to feel about this book. The relationship that is described… might not be a healthy one. I understand that the characters were meant to be real with real problems but there were times when I thought, I don’t know if I care if they don’t end up together. Now, that being said, I still enjoyed the book and their story was definitely an interesting, if not tumultuous one (there’s a words I’ve officially never used in a review until today).

I wanted to have a problem with the bell/dong noise that was in the story since I didn’t quite understand it’s purpose – but I’ve read books that jump back and forth between the present and the past. In a print or ebook you can add in different ways to tell the reader that you’re jumping timelines, but in an audiobook it’s not as easy.  Sometimes it can be done by just changing chapters (and then saying the timeline at the start of the chapter) but in Say You’ll Love Me Again there is a noise that signifies that we’re jumping back in time. As I said, it bothered me at first, but as the story progressed it was a nice way to differentiate. I thought it was pulling me out of the story but it wasn’t. It was actually pulling me deeper.

The relationship (and the good parts of it) were good. They were intense if I were to sum them up in one word. The bad parts and the fights were also intense but in a completely different way.

Told through the eyes of talking to a “life coach” and then later to a real therapist – the story is different than anything I’ve ever read.

Ella Lynch does a really nice job narrating this one. She was able to add the emotion that was needed in the deeply emotional parts. And was also able to even add in a bit of singing when it was needed.

Say You’ll Love Me Again had me laughing one minute and scratching my head the next wondering how on earth everything was going to work out. Archer did a great job telling a deeply complex story and one that dealt with some deeply flawed people.

Do you know how to keep a secret? Sophie, a 23-year-old piano teacher, does, and it’s kept her hidden for the past five years, but now, she’s gone and broken her golden rule: Never let anyone “see” you.

Jazz, a wild and carefree comedian, does more than “see” Sophie, but that’s because your soulmate’s the stranger you recognize, right?

With the woman she used to be threatening to surface, will Sophie succumb to the pull of passion and risk everything for Jazz, or will she hide from happiness to avoid further intertwining their lives, which might ultimately cause the unraveling of everything?

Say You’ll Love Me Again is an exciting, flirty book by the best-selling, award-winning author Kiki Archer, filled with laugh-out-loud moments and intrigue that will keep you guessing until the very end.