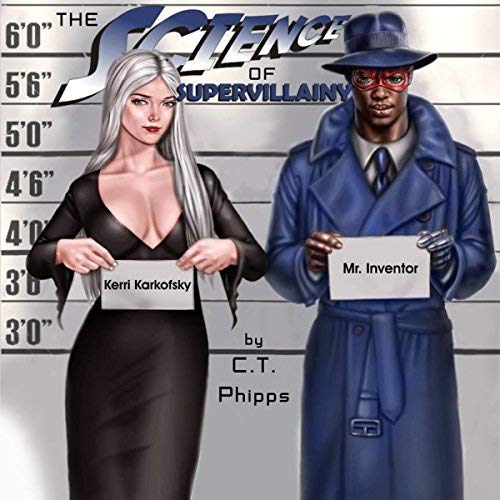 I Lied, Book Four Is My Favorite So Far

Sometimes when a series goes beyond three books what happens is that you start repeating ideas and even some of the snark and wittiness. That is not the case with book four of the Supervillainy Series.

Phipps is at it again this time introducing a doppelganger in Gary aka Merciless The Supervillain WITH Mercy. The fact that this is where this book went cracked me up. Let alone add in the humor that Phipps adds (and Kafer nails in the narration).

In my last review, I said that book four was my favorite but I might have to change my mind and say that the Science of Supervillainy is now my favorite. The dark and kind of moody feel to this book (without losing the charm, funny, and wit) really sets this one apart from the rest.

We have now spent quite a bit of time with Gary and I didn’t think there would be any surprises or new shocking things but in each book (and for some reason especially in this one) he keeps surprising me. Character development four books in for the same main character is shocking to me (in a good way). I love that Gary/Merciless continues to grow and allows me to like him even more as the books go on.

The addition of new characters, especially Gizmo also helped to make this my favorite so far. The reference to old school movies and the relationship really got me.

Something I haven’t pointed out yet in a review is how well Phipps writes dialogue. I guess that because I didn’t notice (meaning it’s done well) is probably why I haven’t pointed it out yet. But in all seriousness, the dialogue just flows from page to page, chapter to chapter, and book to book. He’s able to perfectly capture what a real conversation is like and make it feel like you’re just a fly on the wall. It’s a rare and great thing to have in a book. Phipps nails it.

Overall, as I said above, I believe that Science of Supervillainy is now my favorite book in this series. If you’ve loved the first three and also love witty banter, pop culture references, and antiheroes – then this book and series are for you.

Gary Karkofsky a.k.a Merciless: The Supervillain Without Mercy (TM) returns in the fourth volume of the popular Supervillainy Saga. Having discovered the world's greatest superhero slain by his doppelganger from another reality, Merciful: The Supervillain with Mercy (TM), and the arrogant President Omega, Gary dedicates himself to overthrowing both. Unfortunately, this is harder than it looks since Merciful has all of Gary's genre savviness while President Omega has the entire brainwashed United States military behind him. In the end, though, there can be only one ruler of the world and two of these three feuding villains will have to go.