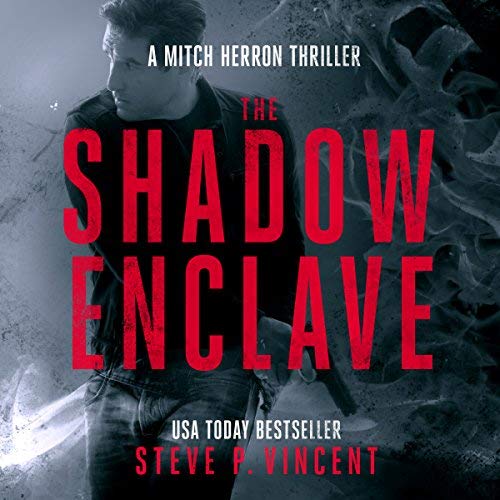 So, The Shadow Enclave is the second book in the Mitch Herron series – and each book clocks in around three hours. While this is more than enough time to write an amazing book – sometimes you’re missing some things. I mentioned in my review of the first book that I didn’t really feel like I got to know Mitch at all. I honestly didn’t feel like I got to know him much more in book two, but there were a few scenes where he described “what he would have done” and how he was going against his wiring.

We also learn a little bit about who trained him along with what he’s probably considered (a beta). I infer this because he ends up meeting the only two Alpha’s ever created (and they were all created by the same group – The Shadow Enclave).

The Enclave feels like this shadow government “they have hands in everything” kind of group – and that’s exactly how Vincent wants you to read it. It feels like he’s trying to spark some interest by including the group the way he does – and he even strikes a nerve with Mitch (who seems to have very little emotion) when he realizes that he’s just a puppet and he’s not just killing “bad guys”.

The Shadow Enclave as a novel was a blast to read – a lot of action and a lot of back and forth compared to The Omega Strain – but still some hits and some misses.

The biggest scene that bugged me in Enclave was the farmhouse scene. It just reminded me too much of that scene in The Bourne Identity where he has to shoot the gas tank to get to cover. Honestly, Vincent could have even taken some liberty here and written something like “it felt like overkill in The Bourne Identity, but honestly, it works” or something like that. It just felt almost like a shot for shot rip off. Another similarity to the Bourne story – he was a government assassin who has gone off the reservation and the government will stop at nothing to kill him.

Overall, an enjoyable 3-hour novella – and one that I’ll keep reading. I want to figure out who the heck Mitch Herron is and I want to see where his death spree will take him.

Some rules can't be broken.

Can a deadly assassin survive a price on his head?

Mitch Herron is used to snuffing out dangerous and evil people. But to save millions of innocent people from a brutal terrorist attack, he disobeyed orders and now killers are after him. The organization he once killed for doesn't tolerate dissent.

The Enclave has come to collect their due. With elite killers on his tail, it's time to kill or be killed. Is Herron up to fighting his former master to the death?

Will Herron be able to turn the tables? Or will the fight consume him? Either way, he's about to find out that disobeying the boss can hurt.

You'll love The Shadow Enclave, the second explosive thriller in the Mitch Herron series, because everyone wants to tell their boss to shove it.