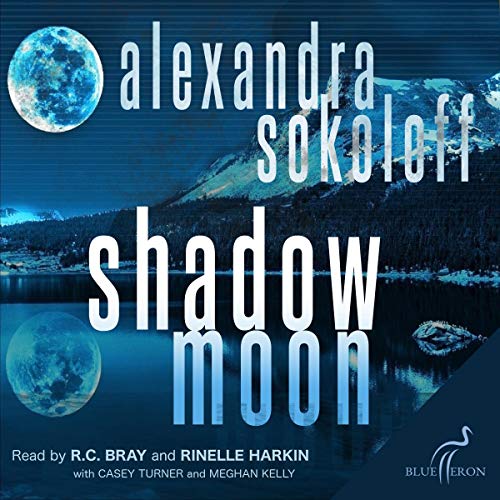 The first thing that jumps off of the page with Shadow Moon was the fact that its narration is done by four narrators.  And not the one chapter by one narrator and the other chapter by the other – this is a real back and forth.  Any male character is voiced by R.C. Bray and the three main female characters are  narrated by the three female narrators. It was a change of pace from the other books in this series, but I enjoyed it. I looked up what other people thought and a lot of people were giving this book some grief because of the difference. Bray is still narrating, but the change of pace was welcome and actually made the story easy to follow.

Second, is that the book is going to jump around a lot. There are flashbacks and older stories that really add depth to the story. Sokoloff gives the reader information about the time change, but its still jarring sometimes. I liked it, but the story is definitely non-linear.

Shadow Moon was the most different in terms of storytelling, but the stuff that Sokoloff is talking about is very real. She’s able to capture a real and terrifying underbelly and does it in a viceral and real way. The predators that she talks about throughout Shadow Moon (not Cara by the way) are insanely real and the story was able to bring this sort of reality to light – I think in hopes that if someone else takes a slightly longer or more in depth look around – they can help prevent stuff like this from stealing the childhood from children.

I enjoyed Shadow Moon, but it was dark and menacing.  Sokoloff was able to capture that tone perfectly, and it lends to some fantastic reading.

I feel like I didn’t talk a lot about the actual story – but there was enough going on that would spoil it that I can’t really talk about it.  The earliest flash backs in the book were disturbing and really set up two of the characters (and their “red string”).  The introduction of the older profiler was also interesting, the scenes with him were fascinating to me.

For thousands of years, women have been prey. This time, the predators lose.

Does fate connect us?

Mass killer Cara Lindstrom is in the wind after a deadly encounter which leaves FBI Special Agent Antara Singh questioning her own sanity and fitness to serve. ASAC Matthew Roarke exiles Singh to Portland to work as an assistant to his old mentor, retiring profiler Chuck Snyder – but a mysterious break-in alerts Singh and Snyder to an active threat revolving around an old case: a series of brutal murders of homeless teenagers on the streets of Portland and Seattle.

Singh and Snyder must go on the road and deep into Roarke and Cara’s pasts to discover a pattern of destiny and interconnection that holds the key to unsolved child murders, past and present.

The Huntress series takes place over six months in the present and in multiple timelines in the past.
Shadow Moon is a culmination of those characters and story lines, and it is strongly recommended that the series be heard in order: