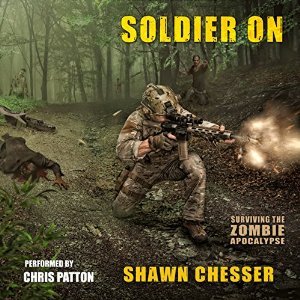 Former Special Ops Delta Force soldier Cade Grayson is trying to survive. Zombies are everywhere.  The “Omega” virus has turned the dead into the living dead.  His wife and daughter are out there somewhere, at least he hopes so.  Follow Cade and his ragtag group of survivors in the next story in the Surviving the Zombie Apocalypse series.

The narration for Soldier on was done by Chris Patton.  Patton did the narration for the first book Trudge also, and since I just listened to Trudge not too long ago I’m really glad that I got to continue with the story.  To me, Chris Patton IS Cade Grayson.  He has the perfect voice to give you a feeling of complete control all while everything is falling apart around him

Soldier on picks up directly after Trudge did, literally being the next sentence.  I’m really glad that I was given the opportunity to listen to this in quick succession because the story was fascinating to me. Normally a zombie book is all about either a survivor or the zombies.  If it’s about the survivor, there are usually two camps, either they are unlikely survivors or likely.  Cade falls into the likely category due to his training, but for some reason, this book feels completely different from other books like it.  I’m going to chalk it up to the way that Chesser writes the story.  Cade’s air of confidence while everything around him goes to crap is really interesting, and even though he’s confident, he’s not cocky.

Chesser does a wonderful job painting the scenes without overdoing it.  So many times authors will spend page after page describing something that is a passing glimpse.  Chesser, thankfully, does not do this.  The reader is given just enough information to feel informed, and then he moves on.

Many times I found myself on the edge of my seat.  I would say that Solider On kept me up late, but I listened to it in two quick successions because I couldn’t get enough of it!

Another part that I really enjoyed was the slight nod to a backstory and the new inclusion of some conspiracy theory in too.

Soldier On was better than Trudge, and I loved Trudge.  I can’t wait to see where this series is going.  Cade, I’m coming with ya!

For Cade Grayson, father, husband, and former Delta Force operator, life has changed drastically over the course of forty-eight hours. He’s watched the dead inexplicably return to life before his very eyes. He’s lost many people near and dear to him, most dying unfathomably horrible deaths at the hands of the dead who have seemingly overnight taken over the big metropolis–their numbers and hunger for human flesh growing exponentially with each passing hour.

After having been forced to kill his reanimated neighbors in self-defense and then surviving the perilous overland journey from his home in Portland, Oregon, Cade finds temporary refuge inside the wire of a Special Forces garrison on the outskirts of Salt Lake City, Utah.

But his stay is short and he decides to strike out alone, resuming the search for his missing wife, Brook, and eleven-year-old daughter, Raven, the only way he knows how—with a laser-like focus and full speed ahead.

So in the early morning hours on Day 4 of what might be the United States and perhaps the entire globe’s Extinction Level Event, he slips out Camp Williams’ back gate riding a specially modified off-road motorcycle.

Armed and resupplied and with only a satellite phone connecting him to the crumbling world, Cade soldiers on eastbound—locked and loaded—with Myrtle Beach, South Carolina, his small family’s last known whereabouts, dead set in his sights.

Meanwhile, four hundred miles away in Colorado Springs, Colorado—the new capital of the United States—President-by-succession Valerie Clay works round the clock with what’s left of the military to gather together the resources and scientific know-how necessary to stop the Omega Virus’ rapid spread and, starting with Colorado Springs, rid the country of the multitudes of walking dead.

Will the nineteen hundred miles and the millions of dead in Cade’s path succeed in keeping him separated from his family?
Will mankind find a foothold against the dead and turn the tide of war?

Cade Grayson, locked and loaded, is determined to find out.