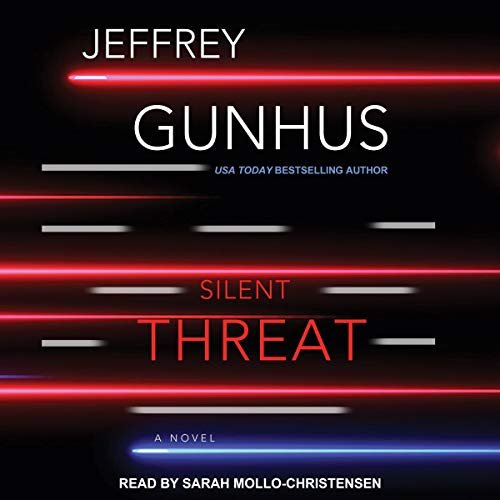 It’s amusing to me that last week I read a book that I thought was going to be full of conspiracy theories and deep levels of power control and manipulation and it wasn’t. It had some of those aspects but not nearly as many as I was expecting. So, this week I go into Silent Threat not thinking any of that (the cover and title don’t really give off the “Deep State” sort of vibe). And man, this one was full of all of those conspiracies and strings being pulled.

Silent Threat starts off with a bang. We’re thrown right into the deep end with this one and we have to swim our way to safety pretty much right away. The intrigue starts off at a 10 and somehow keeps getting higher and higher. Gunhus wrote a book that had me guessing from the 2nd or 3rd paragraph until the bitter end.

I thought that the “daughter sent to kill the father” aspect would play out one way but I was completley wrong. There were so many twists and turns in this one I’m not even sure how Gunhus kept the plot together when writing this.

Throw in great narration by Sarah Mollo-Christensen since she was able to take a good book and make it better with her tight narration of the action scenes and the emotional notes when those were needed as well.

Overall, Silent Threat was a great thriller, full of intrigue, lots of conspiracy theories, and a whole lot of action.

A father charged with treason. A daughter sent to kill him. A shocking conspiracy that changes all the rules of the spy game for a new generation….

With more than a dozen kills under her belt, ex-Marine Mara Roberts is one of the Agency’s most reliable assassins. But her latest target – a convicted traitor about to be released from prison – is different than her other marks. He’s a former agent who betrayed his country. He’s responsible for the death of Mara’s mother. And he happens to be Mara’s father….

Scott Roberts knows that his daughter was sent to kill him. He realizes he has only one chance to change her mind, to convince her that he’s been framed for treason – and that every member of their family are pawns to be sacrificed, one by one. Mara isn’t sure she can trust her father. He is a master of manipulation, as ruthless as he is resourceful. But when her nephew is abducted, she agrees to follow Scott’s lead and expose the global elites who are pulling the strings. But first, they must infiltrate the highest levels of power. Then, they must attempt the unthinkable: Kidnap the President of the United States….