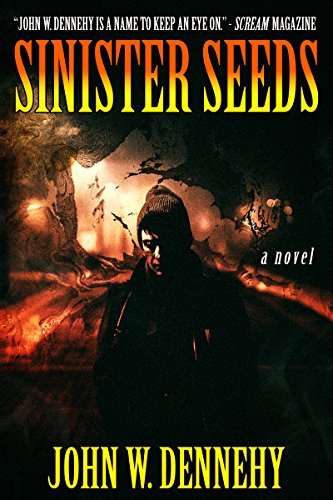 Creepy and Well Thought Out

The opening of this story, without knowing what was going to happen – reminded me a bit of the historical moment that was going on around me while reading.  We had just opened the sarcophagus and found the “mummy juice” inside it.  Well, people wanted to drink it to see if they were given superhuman powers or something (people are crazy). Without giving away too much – that reminded me of the first scenes of this book (not mummy juice – that would have been creepily accurate).

I fight this love-hate relationship with being the first review of a book – especially when I’m sorta torn by it as I was with Sinister Seeds.  Full disclosure: this was a really good book. Especially in the latter parts of it.  I enjoyed the premise, the characters, and the elements that were in play later in the book.  Dennehy jumps right into the action, then we get a bit of a lull, and then we’re back in it again.  The first few pages you find yourself completely lost and trying to figure out what is going on. But you start to piece it together as you dig deeper and deeper into the book. Some of my issues with it were some parts that I felt weren’t needed and some other small issues that I connected with John with already (he’s correcting them).

When I talk about removing some parts – there wasn’t a certain part of the book or even scenes that I can think of – I just know that I’m such a huge fan of Dennehy’s short fiction that I think I was used to his more condensed stories going into this.  If you haven’t read any of his short fiction like Ice Storm and Closing In – this probably won’t bug you.  Don’t worry, he doesn’t give you Steven King details at all, but there were just some “page filler” parts that got to me personally.

There is some dark horror and dark elements at play in this book and the latter parts really had me shivering in my boots.  Sinister Seeds gave me this uneasy feeling that I just couldn’t shake.  That’s the sign of good writing and horror story done well.

Overall, I liked this book and had some small issues with it.  I don’t think that it would bug everyone like it bugged me – so please, do yourself a favor, pick this book up and give it a try.  Leave a review when you’re done too.  It’s currency to authors.

A beleaguered veteran, Harry Mulligan, unwittingly discovers a rare artifact in Boston. The find belongs to a mobster, Patrick Donovan, who collects antiquities from Irish mythology and will stop at nothing to have it returned. Happenstance quickly unfolds into a conflict of good versus evil, as old Harry’s penultimate struggle with the horrors of his past collide with supernatural battles over the artifact. Claire, a professional woman visiting Boston, gets caught up in the ordeal. Time is ticking for anyone who encounters the artifact. Will Harry slay his demons, or become another victim of the desperate mobster?

A supernatural thriller that will keep you turning pages. Find out why reviewers are saying John W. Dennehy is a name to keep an eye on.