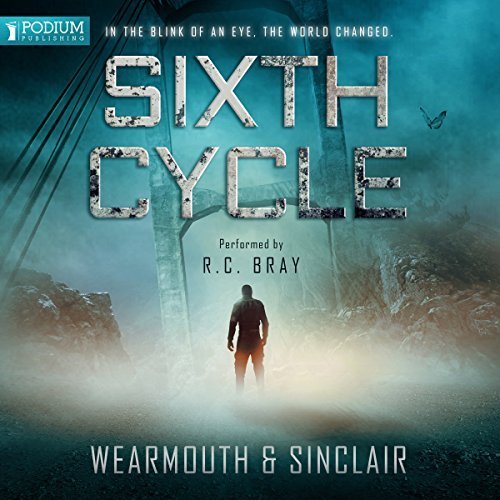 A Fantastically Thought Out Dystopian

After waking to a world, Captain Jake Phillips isn’t sure where he is. He isn’t even sure when he is either. All he knows is that danger seems to lurk around every corner. Follow Captain Phillips as he searches for answers in this new world. Finding traders, villagers, and unknown enemies seeming to lurk around every corner. The people he meets along the way provide him with some context of what is going on, but he will have to find out more on his own.

Narration for this was done by R.C. Bray. Now I have listened to a now SUPER famous R.C. Bray narration in The Martian and this one doesn’t disappoint. While The Martian allowed Bray to stretch his character voices — this story was almost exclusively focused on one character with a few other characters thrown in. He still does a great job with pacing and his voice is incredibly easy to listen to.

This is the definition of a dystopian. Something happened (we’re not really sure until about halfway through) and now there is a society trying to live in this disastrous situation. Like many other dystopian novels, there are different factions, cities, sectors (in this one they are Strongholds). And each one of them provides to the greater good. There is no new story plot here, but it is done in a unique way that felt new and different to me.

The way it was presented from the Captain’s point of view was unique too, because he had no idea what was going on and had to learn of the new way of life quickly. His POV helps the reader grasps just what is going on too, which I enjoyed. The whole book really leads up to the final 3 or 4 chapters — and they are fast and action-packed. I’m also happy to report that this book ended. I don’t think that Wearmouth & Sinclair plan on writing more (but I could be mistaken).

Needless to say, a nice gritty dystopian/post-apocalyptic story with some familiar plot lines and some new characters and points of view.

In the blink of an eye, the world changed.

Danger lurks around every corner.

Captain Jake Phillips wakes in his crash-landed craft and finds Earth transformed into a frightening new world. He faces two immediate threats that will test his survival skills to the limit.

Mutated beings prowl the landscape, hunting humans and searching for the remaining resources. Without a plan in place, the battle will be lost, and humanity as Jake knows it will be destroyed.

Sixth Cycle is a gritty postapocalyptic story of survival and adventure.