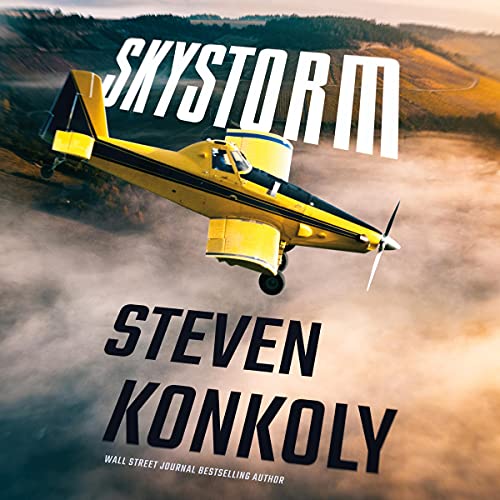 It’s been a while since I’ve written a whole review and lost it. It finally happened again. I wrote a beautiful review of this book and lost the entire thing. So I’m going to try and rewrite it to the caliber of my first one and I hope I’m able to pull that off.

Skystorm is the fourth book in the thrilling Ryan Decker series by Steven Konkoly. And boy has this series been awesome.

Where to start with this one. Well, I’ll start with Konkoly. Steve Konkoly is one of the best thriller writers working. Full stop. He’s able to write books that have breakneck speed action while also being paced out well and include deep and meaningful moments. It’s crazy that one moment Decker is safe and sound and the next all hell is breaking loose. This continues to happen to multiple characters – but not in a way that gets old or even predictable. There was a scene with a house in the middle of the book and I just sat here slack-jawed as the events played out. It was honestly like watching an action movie in my head.

I think the thing that’s happened in the four Decker books (so far) is that Decker has proven himself to be someone you don’t want to mess with. And because of this, people mess with him. It’s sort of like trying to assert your dominance against the most formidable opponent. Unfortunately, with Senator Steele’s backing – Decker is able to pull off some of the craziest things imaginable. And honestly a lot of them are way out of my imagination. Decker is such a fun character to read because he’s not the unfeeling anti-hero that I’m used to reading in these crazy action books. He loves his family and honestly most of what he’s done in the last two books has been to try and keep what’s left of his family safe and sound. You’ve got to love a guy who will do anything for his family.

Skystorm was a fun one for lots of reasons including that both the series and this book have been building to this crescendo. Skystorm has almost the entire book building up to the ending and once that ending hits, both the series and the book just have this overwhelming safe exhale you get once you realize things are okay. I’m not trying to spoil anything here, but I am extremely happy with where Konkoly took Decker in each book and if book four is the last we ever see of Decker, I’d be okay with that. If he decides to write more with different enemies, I’m 100% on board as well. Either way, this series has been a blast from beginning to end.

Thom Rivera has been awesome as the narrator of this series and really has become Decker while also becoming numerous other people in the series.  I think he does a phenomenal job with pacing, speeding up slightly when the action is fast, and slowing down a bit as Decker plans his next moves. Just great narration.

Unmasking a treasonous American conspiracy is a dangerous move in a heart-pounding thriller about greed, power, revenge, and murder.

After covert investigators Ryan Decker and Harlow Mackenzie demolished APEX, a billion-dollar criminal enterprise, a tenuous truce between the two factions suggested the battle was over. But not for Decker’s director, Senator Margaret Steele. She’s uncovered an even deadlier operation – code name Skystorm.

Skystorm violates every international arms-trafficking law imaginable. And for the senator, exposing the plot may be a gamble too far. APEX has caught wind of the investigation, and they’ve gone on the offensive. Steele’s warning to Decker and Harlow: we’re all in a no-holds-barred fight for our lives.

With APEX’s scorched-earth tactics now unmistakable, Decker and Harlow pull the trigger on their worst-case-scenario plan and move to turn the tables on their ruthless adversary. With a shadowy mercenary team, Decker and Harlow embark for a war – one that Skystorm’s influential DC backers have no intention of losing. To safeguard their treasonous secret, they aim to bury it, along with Decker and everyone he loves.