Some Girls Do by Jennifer Dugan (Narrated by Nora Hunter, Bailey Carr) 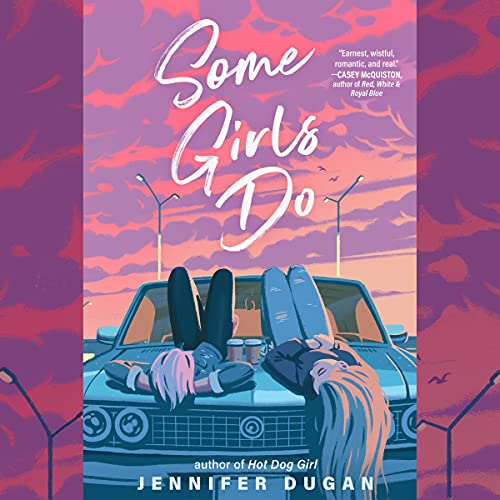 I picked this one up as a “reward” read for myself. I listen to a ton of audiobooks every year and I often forget books that I want to read in the mix (don’t get me wrong, I still read every book for me). But rarely do I have the time or energy to read and review a book that I bought with a hard-earned credit. Now, that said, I promised myself in 2021 that I would. It was one of my goals, which is ironic because Some Girls Do have a lot about setting and reaching goals and doing things for themselves instead of for other people.

Some Girls Do, first off, was adorable, real, and just… near perfect. Dugan set off to write a story that felt like it could have been ripped from any high school while also tearing at the seams of some of the cultural and social biases that people have. She also was able to write about two very different situations. Morgan has a loving family who knows that she’s out and is actively fighting a lawsuit with her former school. She’s living with a brother and transfers to a new school. And there’s Ruby, who is sort of a social pariah. She has a really rough home life and also a complete juxtaposition – on one hand, she does pageants and gets all dolled up for that, and on the other, her passion is working on cars. The two girls couldn’t be more different but sometimes that’s exactly what you need. Fortunately, for both of them – they both have dreams and as Some Girls Do progresses they seem to help each other with that (knowingly or not).

I really enjoyed this one. Dugan was able to write a book that I smiled at throughout. Even when things got tough and Ruby was being self-destructive – it was just so darn enjoyable. I know a few people like Ruby and one person similar to Morgan and the characters are real people – Dugan wrote them in such a way that they definitely jump off of the page.

Add in a great narration by both performers and this is an audiobook that I won’t soon forget. Some Girls Do is one I would highly recommend and now I’m going back to read Hot Dog Girl (on my phone, downloaded, just need to make time for me again) and Verona Comics (since I’ve heard nothing but good things about that as well).

Also, if anyone reads this and has more stories similar to it that I should check out, PLEASE comment below and let me know. Or find me on twitter @brians_books and let me know there. I just finished Not My Problem and Cool For The Summer, both “coming-of-age” queer books, and I really enjoyed both of them. I’d love to find more stories like that.

In this YA contemporary queer romance from the author of Hot Dog Girl, an openly gay track star falls for a closeted, bisexual teen beauty queen with a penchant for fixing up old cars.

Morgan, an elite track athlete, is forced to transfer high schools late in her senior year after it turns out being queer is against her private Catholic school’s code of conduct. There, she meets Ruby, who has two hobbies: tinkering with her baby blue 1970 Ford Torino and competing in local beauty pageants, the latter to live out the dreams of her overbearing mother. The two are drawn to each other and can’t deny their growing feelings. But while Morgan – out and proud, and determined to have a fresh start – doesn’t want to have to keep their budding relationship a secret, Ruby isn’t ready to come out yet. With each girl on a different path toward living her truth, can they go the distance together?

Some Girls Do by Jennifer Dugan
Narrator: Nora Hunter, Bailey Carr
Length: 9 hrs and 14 mins
Published by Listening Library on May 18th 2021
Genres: Romance, YA
Format: Audiobook
Buy from Audible