Some Planets Aren’t So Close to Earth by David J. Rouzzo (Narrated by Victor Warren) 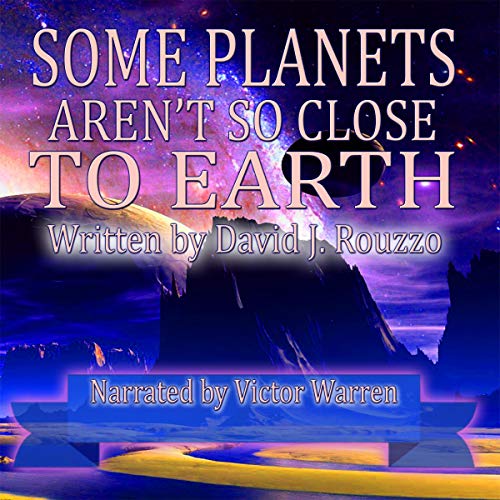 Both Different and Similar in Such A Good Way

I went into this one with a completely open mind. The cover didn’t even really affect my thinking about the book. So, once I started it I was getting some serious vibes from a few different stories I’ve read or watched over the years but it was still a bit different.

The benefit of being similar to a book or movie is that I have a baseline and it’s not all new ideas and thoughts, but sometimes you can get bogged down in “oh this is just a repeat of that”. Some Planets Aren’t So Close to Earth thankfully just used some similar ideas but had a lot more original ones to take it to another level. The story was interesting and kept me guessing around every corner.

As the story neared the end, I was shocked a few times by the different things that were realized or revealed to Zane. The back and forth between him and Amaris throughout was top notch as well – really ramping up the emotional value of the story.

Overall, Some Planets Aren’t So Close To Earth felt original and different while also feeling familiar and comfortable. Rouzzo was able to write things that surprised me but also things that felt right. The story really flowed and once it started down the final slope I couldn’t put it down.

The narration by Victor Warren, while a bit on the slower side was excellent. Warren is able to give emotion without overacting and is able to turn an enjoyable story into something even more so.

From the author of the Hathin series and The Well Strategized and Thoroughly Thought Out Self Destruction of Harry Flynnt comes Some Planets Aren’t So Close to Earth, a tale inspired by the music of independent artist Broken Canvas.

Follow the life of Zane Pierce, a man with a strong admiration for the stars who suddenly finds his dreams haunted by a beautiful woman named Amaris.

As he continues to see Amaris, Zane soon finds himself consumed by his dreams and the world they surround him with. Dreams soon turn to reality, and Zane discovers he is a part of a much bigger picture than he could have ever imagined.

Journey into the realm of David J. Rouzzo’s Some Planets Aren’t So Close to Earth and experience the adventure filled with romance, conspiracy, and suspense that will leave you dreaming about more.