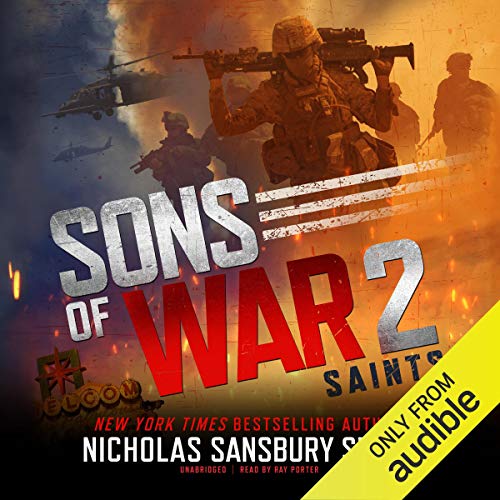 Being the second book in the series – I was a little worried that this was going to be a “cliffhanger” book, or at least one of the books that doesn’t really do anything other than move the story along. Then I remembered that it’s a Nicholas Sansbury Smith book. Sons Of War Book One was really good, like genre-bending good. So I went into Sons of War 2: Saints with high hopes.

Thankfully, Smith delivered on those high hopes and more. The story keeps getting better, and while there were a few moments towards the end where I genuinely thought “he can’t possibly wrap this story line up can he?” I am happy to report that at least that parts I wanted to be wrapped up, were.

What I really liked about Saints was the fact that we got to see other parts of the world. The entire story is about the US and honestly a lot of it takes place in a few places in the states, but Saints took us to other places in the world and we were able to see what the world looked like and how much different the US was after the civil war. Saints also gives us multiple points of view and really cements in just how bad things are in LA.

Now that the families are known to the reader – it’s easier to like them (more than dislike them). And in Saints, they do some more things that are obviously bad (they’re still a mafia), but you can tell it’s one of those “for the great good” kind of bads, so as a reader, it’s forgivable.

Overall, a great addition to this series and if you haven’t picked it up already, you’re definitely missing out. Sons of War is a super interesting take on a post-apocalyptic story that had me staying up late just to see what happened next.

The civil war is over, but the struggle for power is just beginning!

In the aftermath of a devastating civil war, America has fallen into anarchy and chaos. Los Angeles is divided into different territories controlled by criminal organizations. Don Antonio Moretti has won a slice of the pie, but is hungry for more. In his quest for power, he sends his nephew and a small crew to Mexico to negotiate a new deal for their staple product, while the don returns to Italy for some unfinished business.

While the crime families battle for power in LA, Dominic Salvatore and his elite team at the LAPD fight tirelessly to stem the rot. But their fight often seems futile in a force rife with corruption. Dom’s father Ronaldo is a deputy fighting to secure the border, but when intel arises about his missing daughter, he leaves Los Angeles for the desert wastes – to find her and bring her home.

To the Morettis and the Salvatores, family is everything, and they will protect their own, no matter the cost.