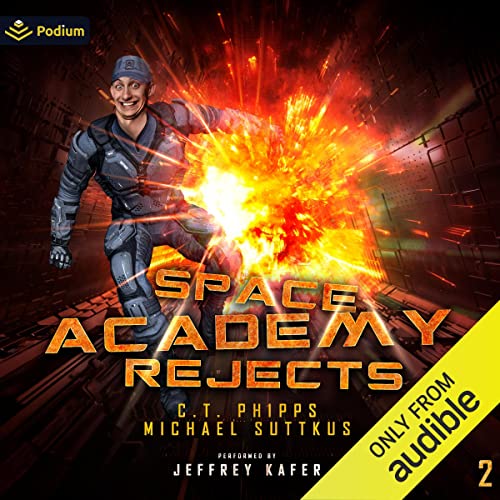 Excellent & A Blast To Listen To

The first book in this series, Space Academy Dropouts, was so good. It takes all of the things I love about Phipps & Suttkus books and seemingly turns them up to 11. I didn’t even think that was possible. So, knowing that there were at least three books in this series, and knowing that they’re coming out soonish made me a very happy guy.

Starting Space Academy Rejects – within a few minutes I had a smile on my face. Vance’s is the perfect amount of sarcastic and every time he says something snarky I’m over here chuckling (while the people in the book get more and more frustrated with his lack of sincerity). The book just keeps on going in a similar direction and with every new thing that happens, Vance has a snarky comment or question and ends up making someone roll their eyes or walk away from him.

Space Academy Rejects was everything I thought it would be and more. Phipps and Suttkus really took the tone they set in book one and said “let’s go even crazier”. That said, this book wasn’t disjointed or written to be “one-speed” or anything. They were able to write a book that really jumps off of the pages while also digging and diving into certain aspects and leaving me while I was reading it feeling almost helpless in some scenes as the character(s) in the book were helpless themselves.

Overall, Space Academy Rejects was awesome. These guys know how to write an entertaining book and this was that and more. I was entertained, I laughed, I even shed a few tears. The Space Academy series is excellent and I cannot wait for the next book.

Jeffrey Kafer nails it. His voice lends itself to the snark and sarcasm that Phipps and Suttkus write. He’s able to really spin his voice and allow Vance to come off exactly how I believe they wrote him. Great narration of a great series.

“Where no one has been dumb enough to have gone before.”

Vance Turbo, Hero of Space, has spent most of his hard-won officer’s career helping refugees. This ends when a star gets blown up and he accidentally ends up saving everyone.

Now the captain of the E.S.S Ares, he is on a goodwill mission to Contested Space. Unfortunately, his crew is made up of people who couldn’t qualify for Space Academy but are now in thanks to lowered enlistment standards. Captain Turbo has also been charged by the Elder Races to find out who blew up the star or they’re going to destroy humanity. Did we mention the evil Notha Emperor wants to be his best friend? All in a day’s work for the galaxy’s most questionably qualified explorer.