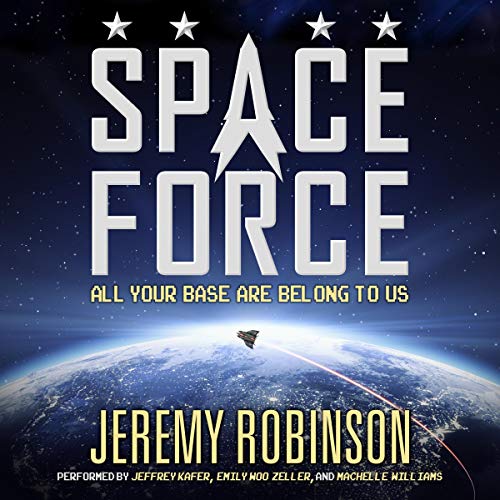 First and foremost, holy crap was this book funny. Seriously, this might be one of the funniest books I’ve ever read. Robinson wrote a perfectly timed book that included pretty much everything that we’re mad or happy about in later 2018 and early 2019.

The premise: Space Force (you know, the branch of the military that Trump made to fight aliens) is being disbanded.  They’re a joke and were where all the misfits of the other military branches were sent as punishment. Right when this happens – aliens attack and force military bases to fight in a real battle royale and the last man or alien standing wins (wins what?).  These aliens (I refuse to ruin the first scene where they see them.  I had to pause the d**n audiobook I was laughing so hard) learned about us through video games. So, this is what life has become.

The book itself will not be for everyone.  Robinson knew that when he wrote it.  But I promise you, if you are unhappy with our orange leader or think that all things related to him are ridiculous I would be shocked if you didn’t like this book.  Now if you happen to sport a red hat and think that by hating other cultures and people we’re making ourselves better… steer clear.

Now that the MAGA wearers have left the review, know that this seriously was a well-written book.  Robinson goes meta at one point talking about himself (but kind of not at the same time).  The lines leading up to it where he describes how this author just keeps going and never gives you a break between chapters and then ENDS THE CHAPTER was just absolute brilliance.

Space Force is all of the things you like about SNL skits, parody movies like Space Balls, and the perfect reminder that other people think things are as ridiculous as you do. Bravo Jeremy Robinson, Bravo.

The characters are well explained and thought out.  The main two were Halle and Ethan and they were perfect.  Ethan was the snarky one who always had something to say and Halle was the quieter one who got stuff done while Ethan was making his jokes.  The other tertiary characters were so good. The bus driver might even top Ethan and Halle for my favorite character. She was absolutely amazing.

There were obvious and borderline offensive stereotypes written into Space Force, but I only say borderline because they were so funny I almost felt guilty laughing.  Easily the funniest was the scene involving the Canadian Special Forces. I won’t ruin that either, sorry.

There is something about a snarky book and character that just mends itself perfectly to Jeffrey Kafer’s voice. He’s able to play into the snark and the sarcasm so well.  This isn’t the first book, nor is it even the tenth book that I’ve read where gets the narrate a smarta** but know he’s the perfect man for the job. I believe that Emily Woo Zeller did Halle’s narration and absolutely crushes it. Machelle Williams didn’t do too much, but was the perfect finishing touch to this audiobook.

I could go on and on about this book and get deeper and deeper into all the reasons that I liked it, but know that it’s easily the funniest book I’ve read this year.  I do hope we get another Space Force book!

Five years ago, the United States Space Force became a reality. And while those writing the checks took things very seriously, the other military branches did not. As a result, Space Force was populated by undesirables: men and women who made too many mistakes, didn’t follow the rules, or…slept with the wrong general’s daughter. Three times. On camera. It was a mistake, okay?

My name is Captain Ethan Stone, a decorated member of SEAL Team 6 turned Space Force ‘recruit.’ While the powers-that-be attempted to make Space Force an embarrassment, they also sent some of the very best minds, fighters, and pilots to the program, because sometimes the best of us decide to take a stand against those same powers. Yeah, yeah. Not me. Though I seem to recall I was standing when…

Flash forward five years and between tenses. President West is in office. Power has shifted. And Space Force is defunded. With just a handful of us still living on base, we find ourselves being evicted. But before all of us can leave, aliens invade. Really ugly ones, too. Super nasty. I don’t think I could describe them here without getting the book banned.

Anywho, using their advanced technology, they seal off Space Force Command behind a shrinking force field and kick off a battle royale to the death. Human vs. alien. To the victors goes the Earth. While my boy Frank Taylor and I throw down inside the force field, my main squeeze, First Lieutenant Jennifer Hale, leads an international strike team into freekin’ space. It’s nuts. Crazy action. Super funny, too, in like a Deadpool way, if that’s your thing.

The only way to really know what went down is to snag a copy of this book and read it for yourself…before it’s too late. Or wait for the movie. There is going to be a movie, right?