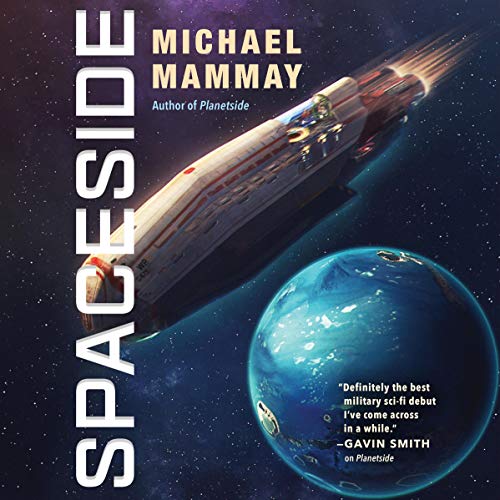 I wasn’t sure where Mammay was going to take book two in this series but this is exactly where it needed to go. I’m a big fan of technothrillers and honestly until the last 2-3 hours of it – it was one. It was a near-future thriller about corporate espionage, hacking, and counter-hacking.

Colonel Butler is back and working a “normal” 9-5 job for a giant tech company.  He works in security but doesn’t really do any security work.  That is until their competitor is hacked and sensitive information is stolen.  He’s call in to investigate.  Suddenly someone he was working with turns up dead and the cops are questioning Butler. A Thriller for sure!

Of course there is still a lot of Science Fiction in it, and I won’t cover what and where since it will ruin the surprises but know that if you liked the military sci-fi part of the first book – you’ll still get some in Spaceside.

Mammay’s storytelling ability in Spaceside is top notch.  Pure fiction from beginning to end that flowed perfectly.  Tie that in with Bray’s narration and it only took me a day or two to finish this one. Another top book for 2019 from me – I think that Spaceside might be even better than Planetside was.

Following his mission on Cappa, Colonel Carl Butler returns to a mixed reception. To some he is a do-or-die war hero. To the other half of the galaxy he’s a pariah. Forced into retirement, he has resettled on Talca Four where he’s now Deputy VP of Corporate Security, protecting a high-tech military company on the corporate battlefield—at least, that’s what the job description says. Really, he’s just there to impress clients and investors. It’s all relatively low risk—until he’s entrusted with new orders. A breach of a competitor’s computer network has Butler’s superiors feeling every bit as vulnerable. They need Butler to find who did it, how, and why no one’s taken credit for the ingenious attack.

As accustomed as Butler is to the reality of wargames—virtual and otherwise—this one screams something louder than a simple hack. Because no sooner does he start digging when his first contact is murdered, the death somehow kept secret from the media. As a prime suspect, he can’t shake the sensation he’s being watched…or finally succumbing to the stress of his past. Paranoid delusion or dangerous reality, Butler might be onto something much deeper than anyone imagined. But that’s where Butler thrives.

If he hasn’t signed his own death warrant.