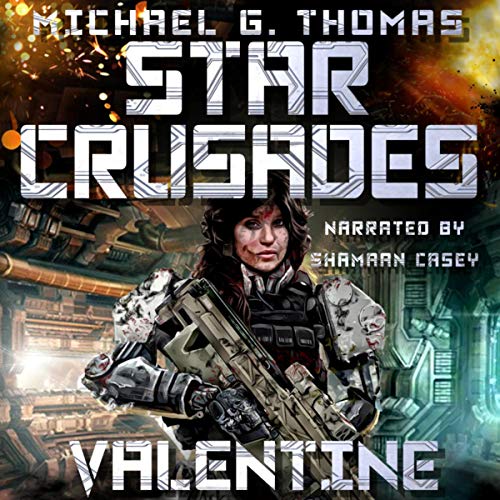 Well This Was Fun

It’s pretty rare that a book just jumps right into the story – this one was one of those books.  I was thrown directly into the fight and I wasn’t 100% sure what was going on but I caught on fast.  Even though it is part of a bigger series – there was still some explaining and teaching about the world and the characters.

The thing that stood out to me quickly was the combination of action-writing from Thomas and the Casey’s narration.  I love when a narrator/author combo works out – even when the main character is a female.  Shamaan has a baritone voice but that didn’t take me away from the badassery of Valentine as a character at all – it added to it somehow.

The thing that I took away from the book was the use of enhancements and improvements to the human body.  That part was interesting and felt real and even though I’ve heard it done before also felt pretty unique. Throw that in with the insanely fast-paced storytelling and lots and lots of action and you have a space opera/military thriller for the summer that will knock your socks off.

Overall, I enjoyed this book and would definitely continue the series once those books are released.

Valentine never thought death would be so difficult. Tough, a crack shot and popular with her unit. She\'s a young woman with a bright future in the Corps. But everything changed the day her unit boarded the dreaded \"Burijas\", a Leviathan Class Battleship and flagship of the invading Star Empire. The assault is a bloodbath, but little does she know it will be her last action. A devastating blast tears her fragile body apart, leaving her a broken woman close to death.

Nothing goes to waste in the Alliance, and trained and experienced marines are prized assets. Valentine is given a unique chance, one that could see her return to the frontline as part of the Novas. A brand-new elite unit of cybernetic super-soldiers, and lead by the charismatic Captain Olik. And he\'s no regular marine, he\'s an enhanced Jötnar that\'s twice the size of a man, and 10 times more dangerous. Valentine will need to prove her worth as she fights for a place among the Novas. War is brewing on a distant world, a war that will need the Alliance\'s best, and the Novas will be leading the charge.