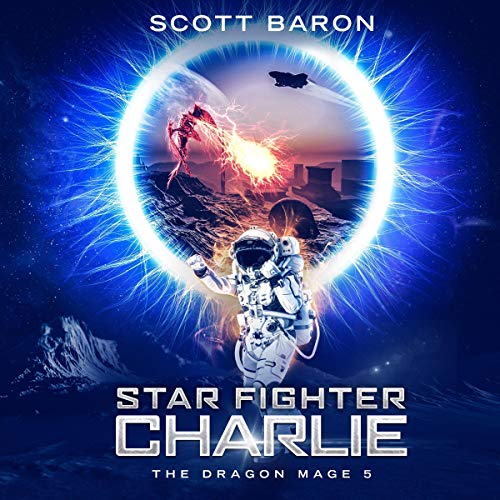 Star Fighter Charlie is the fifth book in the Dragon Mage series from Scott Baron and Baron isn’t holding any punches. In this one we’re treated to a couple different alien races, a planet hopping chase throughout the solar system, unbelievable selflessness, and so much more.

The “human” elements of all the characters (including the non-human ones) are what really make these stories. The connections that Charlie has made, the connections that his crew and friends have made with each other, the acts of selflessness, the kindness, the love. Those are some of the major reasons that these stories work so well. I won’t ruin one of the major plot points in this book, but it brought a tear to my eye. It was unexpected and honestly awesome.

Star Fighter Charlie was another book full of scenes out of an action-packed Science Fiction movie… with a dragon of course. I realize as I sit here trying to describe the book and talk more about it that it’s really hard to do that without spoiling most of the points in it. I’ll either spoil books 1-4 or the major points that Baron has in this one.

Just know, that if you’re this far in – the series isn’t getting stale yet. Baron is able to write in a way that keeps dragging me in deeper instead of pushing me away. I don’t know how many books are currently written, I do know that I have book six in my audible queue (review coming super soon). But, I definitely want to know what is going to happen to Charlie, but not just Charlie – his friends too. They all mean something to me now and I hope that all of them are able to solve the worlds problems and get home safely. Wherever home ends up being.

I also need to point out Gary Bennett’s narration. He’s been a steady player since this series was first brought to audio – and he’s able to bring each character to life. He performs without going overboard. There is no unneeded drama. It fits with the series and the storytelling inside of it so well that it’s hard to imagine another narrator doing the series.

A magic wielding astronaut fighting off an alien invasion with his dragon friend? Charlie thought they might actually pull it off… that is, if Lady Luck decided to play nice for a change. Unfortunately, knowing his fortunes, the odds of that were slim to none.

Could a magic wielding astronaut fight off an alien invasion with just his vampire assassin and space dragon friends? Amazingly, Charlie thought they might actually pull it off… that is if Lady Luck decided to play nice for a change. Unfortunately, knowing his fortunes, the odds of that were slim to none.

The aliens were coming, that much was certain. What they could do to stop them, however, remained up in the air. Having joined forces with the mighty AIs overseeing the planet and its defenses, at least their toys had been upgraded accordingly. The magic users now had big guns. But against a magical enemy they couldn’t see coming?

All the weapons in the system would not be of any use. They were screwed. That is, unless they could somehow harness their own magic. That, or perhaps bring to bear something entirely new, spawned not in a distant galaxy, but rather in their own realm.